One in 10 children in Ireland gambling illegally, survey finds

Two-thirds of us gamble, while four in 10 people are regular gamblers, study shows 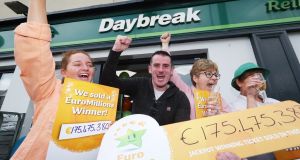 One in 10 children are gambling illegally on lottery tickets, scratch cards and horse- or dog-racing, according to a new survey.

Two-thirds of us gamble, while four in 10 people are regular gamblers, the survey shows.

The most common form of gambling is scratch cards, bought by 57 per cent of people in the past year. One in three people buy scratch cards monthly.

The Department of Health survey findings echo those of the lottery regulator, whose mystery shopping exercise last month found that four out of 10 retail outlets were selling scratch cards to minors.

The National Lottery said it had responded to these findings by taking additional steps to ensure players’ ages are verified. These include the appointment of a retail compliance manager, the provision of age control messaging on point-of-sale equipment in retailers and “own audit” verifications.

“All of our retailers are contractually obliged not to sell National Lottery games to under 18s and must commit to our Sales Code of Practice to ask for age verification if in any doubt,” a spokeswoman said.

Older people are most likely to gamble, the survey found; almost half of those aged 55-64 years reported gambling on a monthly basis.

However, online or phone gambling was most common among younger people – reported by one in 20 of those aged between 18 and 34 years.

Lottery tickets and scratch cards also accounted for more heavy gambling, with 11 per cent of people reporting spending over €250 a year on this form of gambling.

Gambling prevalence was higher among higher socio-economic groups such as middle managers, higher civil servants and business owners, and lowest among unskilled manual workers and apprentices.

In relation to problem gambling, almost 5 per cent of men and 2 per cent of women reported “chasing losses” in the past 12 months.

One in four people (26 per cent) report buying lottery tickets or scratch cards weekly while 31 per cent place bets in a bookie shop on a weekly basis.

The figures, which date back to 2014/15, were published under a bulletin of a drug prevalence survey by the Department of Health.

“The statistics show that many people in Ireland engage in various forms of gambling without any issue arising. For the small percentage of people for whom gambling is a problem, we need measures to reduce problem gambling and its impact on individuals and their families,” said Minister of State at the Department of Health Catherine Byrne.

Legislation on the regulation of gambling is due to come before Cabinet shortly.