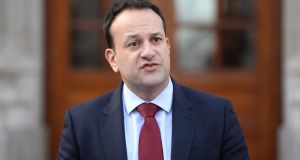 A new overseas development aid policy, published by Taoiseach Leo Varadkar on Thursday, will have a particular focus on issues such as gender balance, governance and climate change.

It aims to double the funds being spent within a decade. At present Ireland spends 0.31 per cent of gross national income on overseas aid. The Government has committed to reach the United Nations targets of 0.7 per cent of GNI by 2030.

In all Irish development aid is distributed in 130 countries across the globe, with nine countries afforded priority status. Eight of those are in Africa and Vietnam is the ninth. That status will remain unchanged but the policy will move from the traditional focus of reaching out to the poorest of the poor, to a focus on those who who have been left furthest behind. While that shift involves an updating of language, it encompasses a subtle change where programmes may span borders, especially in conditions of conflict and famine.

Another example is while on paper, Nigeria is one of the strongest economies in Africa, there are projections that it will have the highest proportional number of people in absolute poverty by 2030 Because of poor redistribution of wealth.

The policy will also be flexible enough to deal with developing and sudden humanitarian crises. Irish Aid programmes in Syria and Yemen are examples of this.

The programs will reflect three areas in particular where Ireland has recognised expertise: namely food production and systems; people skills and expertise; and governance.

The knowledge gained by Ireland in moving from a relatively poor agricultural economy to having one of the most sophisticated food production industries in the world provides a good illustration of how that experience can be applied.

Speaking ahead of the launch, officials gave an example of potato yield in Kenya which is approximately five tonnes per hectare in some regions. In Ireland the comparable yield is 60 tonnes a hectare. Irish aid programs have helped farmers in Kenya increase yields by a multiple, by applying that knowledge gained in Irish agriculture.

To reach the goal of 0.7per cent of GNI, the budget for overseas development aid would have to be increased by approximately €115 million each year between now and 2030.