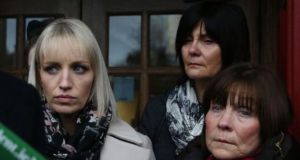 The family of Clodagh Hawe have asked the Minister for Justice Charlie Flanagan to help them get access to information on her murder through the Department of Education, Tusla and the coroner.

Mary Coll and Jacqueline Connolly, Clodagh Hawe’s mother and sister, made the request in a letter to the Minister which they gave to him during a meeting in the department yesterday.

The letter, which has been seen by The Irish Times, makes 10 specific requests. They have told Mr Flanagan that it was “wrong on so many levels” that they had to wait more than a year to get certain information.

The family will also seek access to Garda files on her murder and the murder of her three children when they meet with Garda Commissioner Drew Harris next week.

Ms Coll and Ms Connolly said Alan Hawe was in conflict with a work colleague and had contacted teaching union the INTO and in his suicide letter expressed concern that “the truth was going to come out”.

In the submission, they sought further information about the murders.

“In his murder letter, addressed to us and members of both families, Alan Hawe stated he was ‘caught red handed’. We want to know what was Alan Hawe caught ‘red handed’ at and where? We want specific details of any investigation conducted by the school into Alan Hawe that the school may have been obliged to report. We would be obliged if you could assist us in getting information from the Department of Education, Tusla or from the Coroner who conducted the inquest as necessary.”

“These murders were premeditated and meticulously planned and we believe it is wrong to suggest they can be explained away as a violent, murderous act caused by depression. It is wrong for society to see mothers and children being murdered by their husband and father and conclude it happens solely because of mental illness,” the letter reads.

The family also want to know if their case formed part of an ongoing review of cases of domestic homicide. They called for the establishment of “robust support mechanisms” for survivors and families of victims.

They have also called for the introduction of independent multi-agency domestic homicide and child death reviews.

Mr Flanagan said his officials will examine possible changes to the Succession Act and to coroner’s legislation. He indicated he would work with other departments on their requests.

Garda Commissioner Drew Harris was asked yesterday about giving the family access to the Garda files. He said, “I am meeting the family next week and I will listen to their concerns. And, really, out of respect to the family I first of all need to have a conversation with them before we decide on the next steps. But we want to be as open and transparent with them as we possibly can be.”