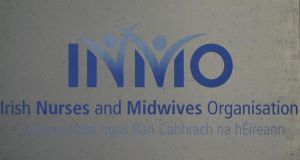 The Department of Health and the Department of Public Expenditure declined to comment on Wednesday on whether nurses would still be allowed to move to the new scales from the beginning of March in the event of the new nursing contract not being finalised in time. Photograph: Nick Bradshaw/The Irish Times

Government representatives held their first round of talks on Wednesday with nursing unions on a new contract which forms part of proposed settlement to the recent nurses’ strike.

However it would appear that the contract talks are unlikely to be concluded within the three-week deadline proposed in the Labour Court recommendation which led to a suspension of the strikes by nearly 40,000 nurses earlier this month.

Under the proposed deal nurses would be permitted to move onto a new enhanced nurse salary scale – which attracts higher payments – after the beginning of March.

The Department of Health and the Department of Public Expenditure declined to comment on Wednesday on whether nurses would still be allowed to move to the new scales from the beginning of March in the event of the new nursing contract not being finalised in time .

“It would be premature to discuss the outcome of these discussions at this stage .”

Meanwhile, the INMO is to celebrate its centenary on Thursday with an event at the Mansion House in Dublin – the site of the organisation’s first public meeting 100 years ago.

The INMO began life as the Irish Nurses Union in 1919, with the aim primarily to improve pay and set professional standards.

It was said to be the world’s first trade union for hospital nurses and was initially a branch of the Irish Women Workers’ Union.

In the 1930s, it became the Irish Nurses Organisation (INO), affiliating with the International Council of Nurses.

In 1990, it affiliated with the Irish Congress of Trade Unions.

In 2010, it changed its name to the Irish Nurses and Midwives Organisation, to reflect the increasing professional and legal distinctions between nurses and midwives.

The union now has over 40,000 members throughout Ireland.