‘The younger people are fearless’: Belarusians protest in Dublin 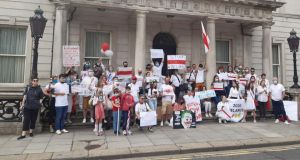 The protesters at the Department of Foreign Affairs. Photograph: Polly Dennison

A small group of protesters gathered in front of the Department of Foreign Affairs in Dublin on Saturday afternoon, to bring attention to the ongoing civil unrest in Belarus.

After 26 years in power, Alexander Lukashenko declared himself the victor in the country’s presidential election last Sunday. His opponents accuse his regime of rigging the election, at which he took an unlikely 80 per cent of votes according to the state count, and then coercing his main challenger, Svetlana Tikhanovskaya, to flee the country for neighbouring Lithuania on Tuesday

In the week since the election, both the Council of the European Union and US secretary of state Mike Pompeo have said the elections were not free or fair.

Protests broke out across Belarus, with demonstrators calling for Mr Lukashenko to leave. Riot police responded with a violent crackdown, detaining up to 7,000 people. The EU condemned the state’s response, saying it “deployed disproportionate and unacceptable violence”.

Katia Lysionak (34), originally from Belarus but living in Ireland for the past three years, organised the demonstration in Dublin.

“I’ve never organised a protest before, or been to one before,” she explains, dressed in white, with flowers in her hair – the symbols adopted by the movement to signify a peaceful protest. “This is a march in solidarity with Belarus. The people exercised their right to peacefully protest, to express their political opinions. And in return the police used excessive force.

“They detained 7,000 people in four days. Two nights ago, the torture reports were released. Hundreds of people have been tortured,” she said.

Amnesty International, along with local Belarusian human rights groups, have collected testimonies from protesters in the country, who have described being tortured in detention centres. The accounts include allegations of being stripped naked, beaten and threatened with rape.

Ms Lysionak echoes this saying she has also been told of children being held and beaten by police forces, after being separated from their parents.

“Protests still take place. It’s been six days. But there’s been no more violence. After those reports were released, the peaceful protests continued but the police took a step back. They apologised but nobody resigned. The president hasn’t addressed it. He currently ignores what’s going on.

“We support Svetlana Tsikhanouskaya as our real president; who’s believed to have won in actual numbers, if they were counted in the right kind of way.”

In the initial days of the protests, Belarus’s government disabled the country’s internet. However, Telegram, an encrypted messaging service, still worked, and Ms Lysionak says this is how protesters have organised the movement, and communicated with the rest of the world about what was happening to them.

“This change of power, that some call a revolution, is happening thanks to social media and the free flow of information. [Telegram] was the bridge between Belarus and the world, under the block out, until the world turned their eyes to Belarus.

“The younger people are fearless. They’re spearheading this. But there is a lot of fear in Belarus. It’s been instilled in us for 26 years. We were taught to keep quiet, keep silent, to not have a political opinion. But the world changed. While [Lukashenko] remained in power, the world changed around him. He’s becoming obsolete.”