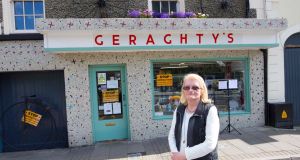 An 85-year-old Carrick-on-Shannon woman says she is traumatised after learning from “a person on the street” that Leitrim County Council intends to demolish her home and business on the Main Street, to make way for a “destination centre”.

Kathleen Geraghty, who has run a shop in the centre of the town for 65 years, says she was never consulted about the proposal which would require the demolition of three buildings that are part of the original streetscape.

An artist’s impression of the council’s plan, which the local authority described as a “concept proposal”, shows a glass structure spread over the three properties that are opposite St Mary’s Catholic Church.

The Geraghty family – who are “disgusted and devastated” over how the council has handled the project – say thousands of people have signed a petition opposing it, including almost 3,700 online.

Local Fine Gael Cllr Finola Armstrong Maguire, who owns one of the three buildings involved, and runs The Magnet drapery store from there, said she had agreed to the “concept”. She said she did have concerns about the proposed building but believed there was “room for compromise”, such as having parts of the existing buildings incorporated into the new structure. The council has said that as a centre for artisan and originally-designed goods in the centre of the town, it would be a significant draw.

“My bottom line is that I believe that health and education must be our priorities in the current circumstances”, added Cllr Armstrong Maguire, who questioned whether finance would be available for such an ambitious project.

Mrs Geraghty, whose late husband Pat bought their building in 1953, said they had reared their nine children there and had sold everything from fishing tackle and musical instruments to bicycles, while also for many years running a bar. “I am very, very traumatised by this,” she said.

Her daughter Ella said they were opposed to the plan not just for the family’s sake but because they believe it is the wrong thing for Carrick-on-Shannon to replace buildings which survived since the 1800s with a glass structure. “My mother will not give up without a fight,” she said.

“There are so many empty retail units, and buildings which are derelict in the town and this plan would affect seven businesses which are still trading. Surely this is the exact opposite to what they should be doing,” she added.

She said that just last year Leitrim County Council had included Geraghty’s in an exhibition celebrating the county’s traditional shopfronts “and now they want to demolish it”.

There is a preservation order on part of the third building which used to be known as “the canon’s house”and which is occupied by a butcher’s shop, jeweller’s and two other small businesses.

Independent Cllr Enda Stenson said he had never seen the council mishandle a project to such a degree since he became a councillor in 1999.

He said he and other members of the Carrick municipal council had not been informed that an application for funding was going to the Department of Housing under the Urban Regeneration Development Fund (URDF). “I was extremely disappointed with how this was dealt with, with no proper consultation especially with one of the families involved,” he added.

“I certainly would support the enhancement of any town in Leitrim but I would never ever support compulsory purchase orders for anybody’s dwelling or business.”

Leitrim County Council said the project was only at conceptual stage “and no planning approval process whatsoever has commenced for this concept”.

The council added that if approved for funding under the URDF, “full public consultation and engagement will take place to shape and evolve what is presently a concept into a full design brief”.

Only on completion of this full design stage would the planning approval process commence, it added.

The council said that with towns throughout the country under immense pressure to survive “it is the considered opinion of the executive of Leitrim County Council, if such a destination facility was to be built in the town centre of Carrick-on-Shannon, this national trend could be reversed, and the destination centre in its own right would become a must-visit destination for all visitors travelling the N4 and local people from across the region”.

The Geraghtys have said they no longer have trust or faith in the council. “We want it known that we did not and do not give our consent,” said the family.

“This is our home . . . We’re devastated but there is a principle involved about knocking down buildings,” said Ella Geraghty. “Once they are knocked down they are gone.”

She said the family supported the regeneration of Carrick but “we are not convinced this plan is for the betterment of Carrick”.

The council previously said it regretted any misunderstanding that had arisen in submitting the application “as this was never the intention”.