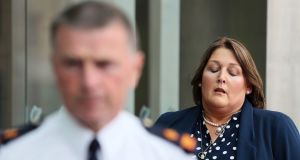 Caroline Donohoe, the widow of Adrian Donohoe, outside the Criminal Courts of Justice, Dublin on Wednesday. Photograph: Brian Lawless/PA

Former minister for justice and TD for Louth, Dermot Ahern has paid tribute to the Garda, the PSNI and US authorities for their patience and determination in bringing Aaron Brady to justice for the murder of Detective Garda Adrian Donohoe.

From the minute that the murder had occurred the gardaí “had an idea” of who was responsible, he said, but it had taken seven years to gather the evidence. Mr Ahern admitted that he had worried that there might not be sufficient evidence for a conviction.

Mr Ahern told RTÉ radio’s Today with Sarah McInerney show that he had known Adrian Donohoe personally. “He was a lovely man, a gentle giant, he would do anything for anybody.” It had been devastating to see the way he was murdered so callously.

Gangs like this operated along the Border for years, he said. They were a still a difficulty and there was still intimidation. He cited the example of the Paul Quinn murder for which no one had been convicted. “That’s the type of climate”.

Mr Ahern said that had been the reason he had introduced the legislation for the Special Criminal Court when he was minister for justice. There was significant evidence of witness intimidation and witnesses were distressed at having to “go into a box and give evidence against people who are dangerous.”

The former minister agreed with the comments of the judge in the Aaron Brady case about intimidation through social media and he hoped that the people involved would be prosecuted.

The people who deserve great credit were the witnesses who came forward, he said.

Mr Ahern said he was relieved that justice had been done for Det Garda Donohoe and he hoped that more people will be found guilty for “this heinous crime.”

The murder and the fact that he had been gunned down so callously, along with the murder of Garda Tony Golden, had put a cloud over the Co Louth area, he added. Det Garda Ryan, who had been in the car with Det Garda Donohoe “must have had an awful time” and the murder had also had an impact on the staff of Lordship Credit Union.