‘The sea was getting fretful and angry’: Ted Crosbie on Fastnet disaster 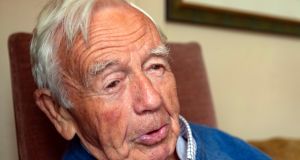 Ted Crosbie, former chief executive of Examiner Publications and a keen sailor, recalls the moment 40 years ago when he decided to abandon plans to watch yachts competing in the Fastnet Race and head for a safe harbour.

“The sea was getting fretful and angry and I didn’t like the look of it so I said to the crew, ‘We’re heading for home’. It was about a force 5 or 6 but by the time we got back to Schull an hour later, it was blowing a force 9 or 10,” he said.

Sailing out from Schull, Co Cork, to take photographs of the competing yachts had become something of a family tradition ever since Crosbie’s late father, Tom, hired a trawler in 1961 and brought out a photographer to record the race.

Rather than hire a trawler in 1979, Crosbie decided to head out on his new Sadler 32, Maraquita.

Joining him aboard were his daughters, Liz Shanahan and the late Suzanne Crosbie, sailor Finbarr Butler and the late Michael Olney, described by Crosbie as “an ace photographer with a bad stomach”, whose task was to capture the yachts as they rounded the Fastnet for the next day’s edition of the newspaper, then known as the Cork Examiner, now the Irish Examiner.

They left Schull on the afternoon of August 13th and were in place off the Fastnet Lighthouse – the stout sentinel made from Cornish granite that stands nearly 50m high on a lonely outcrop of rock some 13km from the mainland – well in time for the first rounding at 7pm.

“I think Tenacious came around first. She was owned by Ted Turner. He was in the media business in the US. They pulled in the sails and got around the Fastnet. The sea had been flat as a board, but just as she was going around, the skies began to darken and it began to pipe up,” Crosbie says.

“We probably got photos of another two or three boats rounding the Fastnet, but at this stage poor Michael Olney was prostrate on the floor, so I had a good look at the weather and I said ‘To hell with this’, and we headed for home.”

Crosbie began sailing dinghies as a 10-year-old in 1941 and his weather eye proved invaluable, as by the time they reached Schull Harbour an angry and violent storm was in force that would leave yachts capsized and 19 sailors dead.

The plan was to pull up at Schull pier and get Olney ashore with his photos, but the strong southeasterly blowing straight into the harbour made that manoeuvre too dangerous, so they were forced to try and anchor in the harbour.

Crosbie’s daughters served up a meal as the gale raged around them but the anchors began to drag and the rope from the kedge anchor got wrapped around the propeller, knocking out their engine and leaving them to the mercy of the sea.

Crosbie decided the best course of action was to head back out of the harbour and around Long Island, and they spent the night sailing up and down Long Island Sound, lying in the lee off the island, which spared them from the storm’s worst excesses.

“We knew we could use the shelter of Long Island, so we sailed up and down the smooth water of the Sound until about 4am – till the wind changed. Someone saw us and I became known as the ghost of Long Island Sound!” Crosbie says.

Not that it was all quite so light-hearted at the time, as Shanahan remembers. “I do remember Dad saying several times that night, ‘Those poor devils outside’, because you knew that bad and all as it was for us, it was going to be awful for those boats out by the Fastnet.”

Both Crosbie and Shanahan were keen to pay tribute to Butler, whose physical strength was critical to them being able to put three reefs in the mainsail and tack to enable them to ride out the storm. When the calm came, they sailed back to Kinsale.

“I know most of the publicity has been about the RAF but I think the people who did most were from Baltimore RNLI,” says Crosbie. “They were at sea for 24 hours, rescuing yacht after yacht. They did some tremendous work.”