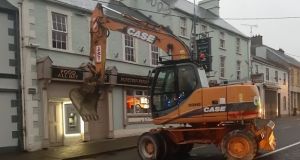 The scene in Virginia, Co Cavan, where two men were arrested in connection with an attempted ATM theft. Photograph: Garda Press Office

Gardaí have arrested three members of the gang suspected of involvement in a spate of ATM robberies in the border region this year.

The arrests were made following an intelligence-led operation which foiled an ATM robbery on the main street of Virginia in Co Cavan in the early hours of Wednesday morning.

Detectives also seized more than €300,000 from a site in Moynalty, Co Meath, believed to be the proceeds of previous ATM robberies by the gang. A number of cars suspected of being used in those robberies were also seized.

The operation, which had been planned for at least two weeks and involved national and local units, puts a significant dent in the gang which is believed to be responsible for a large portion of the 31 ATM robberies which have occurred on both sides of the border this year.

At least one member of the gang escaped capture during Wednesday morning’s operation. Searches, aided by the garda helicopter are continuing in Virginia and in its surrounding areas. Gardaí believe they will make several more arrests over the coming days.

The dramatic sequence of events began at about 2am on Wednesday night when the gang stole a digger from a local building site and drove it to the front of the Riverfront Hotel on Virginia’s main street.

Plain clothes and uniformed gardaí, including officers from the Emergency Response and National Surveillance Units, were lying in wait having received intelligence about a planned robbery in the area.

Armed officers moved in just as the men were about to use the digger to rip an ATM from the wall of the hotel. One man (28) was arrested. Another attempted to escape in a jeep which he crashed.

He then escaped on foot along with a third suspect. A massive manhunt was launched with armed officers and the garda helicopter searching the town for the remaining suspects throughout the night and morning.

Meanwhile, in Co Meath officers moved in on the gangs’ suspected base where they seized the money and cars. Another man, aged 61, was arrested there. Gardaí had been aware of the location for some time but waited until after the raid to move on it so as not to tip off the gang.

At about 2pm back in Virginia, officers received information one of the robbery suspects was hiding in a toilet cubicle at the Riverfront Hotel. Armed gardaí rushed into the hotel, causing diners and guests to scream and dive to the floor, and arrested the 28-year-old man in the toilet.

Gardaí believe he had spent the small hours of Wednesday morning hiding in a nearby wooded area before entering the hotel through an open window.

The three men are being held in Kells, Carrickmacross and Bailieboro Garda Stations under Section 50 of the Criminal Justice Act 2007 which allows them to be detained for up to seven days.

National garda units had been in the area for at least a week waiting for the gang to strike. Previous operations targeting them have been unsuccessful.

Searches are continuing at the location in Moynalty and an incident room has been established at Bailieborough Garda station.

“This remains a live investigation and it is anticipated that further searches will be carried out in the immediate future,” Superintendent Gordon Englishby said on Wednesday evening.

“We believe there may be a link between the attempts this morning and other events which have happened in the north east in recent months,” he said.

Gardaí have appealed to anyone on the road around Virginia between 1am and 3am on Wednesday, especially those with dash cams, to contact the incident room at Bailieborough Garda Station on (042) 9694570, the Garda Confidential Line on 1800 666 111 or any Garda Station.