The power of true leadership

Jesus leads us in our faith and brings it to perfection 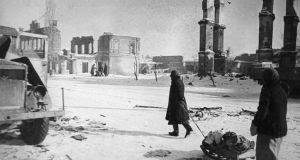 A handful of people remained on Stalingrad’s streets during its siege by the Nazis. Photograph: E Kopyt/Hulton Archive/Getty Images

Have you noticed how politicians come to power promising to clean up society? The more right-wing they are, the louder they are in making it known how they are going to stamp out every type of evil and wrong-doing.

Dominican priest Donagh O’Shea, in one of his Gospel commentaries on Goodnews.ie, makes the point and adds that it is noticeable that Jesus never promises to clean up society, but he certainly has the welfare of people at heart.

In the letter to the Hebrews (12: 1-4) in tomorrow’s liturgy we are told not to lose sight of Jesus. He leads us in our faith and brings it to perfection.

What are the qualities of good leadership? If a politician attends a family funeral should we look favourably towards her or him when elections come around. Is that the way it works, is that the way it should work?

Somewhere at home I have a charming letter a senior politician wrote to me on the occasion of my father’s death.

Listening to the roar of approval US President Donald Trump received at a rally in Orlando I sat and wondered why people supported the man. They must genuinely believe that he is doing a good job for them and the United States.

What should we ask of our leaders? Surely it’s the job of politicians to enhance the common good and improve the lives of all the citizens but especially those who are weakest and most in need of help and support?

Leadership today has much to do with “sound bites” and appearance. It seems so superficial but maybe we have given too much importance to temporal leaders and placed too much trust in them.

Vasily Grossman’s novel Stalingrad was first published as a book in Russian in 1952. It has been translated into English this year. Grossman was a war correspondent looking on events as they unfolded from a Soviet perspective. Stalingrad paints a detailed picture of what life was like for the people after the German invasion of the Soviet Union in June 1941. And then the terrible battle and ultimate Red Army victory at Stalingrad, after five months of what must be the bloodiest warfare mankind has known.

Novikov is a Soviet colonel, who witnessed the German breakthrough at Brest. He is a thinking man. Grossman expresses brilliantly Novikov’s thoughts on his fellow officers immediately after the German invasion: “Many of those who were usually most timid and silent, seemingly untalented men whom nobody noticed, revealed a wonderful strength. And sometimes he glimpsed an unexpected void in the eyes of commanders who only the day before had seemed the loudest, most energetic and self-confident; now they seemed lost, crushed and pathetic.”

In so many ways our lives are lotteries. We are far more fragile and vulnerable than we ever imagine. We can be easily manipulated. Often, we find people in positions of leadership who are simply not able for the job. It happens all the time right across society.

It can be so easy to get angry and frustrated with our leaders. And then that reading in the letter to the Hebrews pops up and we are told that Jesus leads us in our faith and brings it to perfection.

It is never a good idea to place too much trust in human leadership. I’m thinking of that now-famous comment of Enoch Powell that “all political lives end in failure”, because that can be the nature of politics and of human affairs.

Notice how so-called strong politicians, especially the dictator-style ones always find so much to clean up and clear out. They always find scapegoats and blame most of the woes of the world on them. The same too in the churches. It’s so easy to focus on some terrible evil, whip up the crowd and get a good fight going.

I’m back thinking of Novikov’s description of those soldiers who were at one time considered untalented and then those “important ones” who were tested and found to be pathetic.

It is never a good idea to underestimate the wisdom and strength, indeed, the faith of the people of God.

The style and method of Francis’s papacy places great emphasis on the community. This pope issues no big edicts, makes no dramatic hardline utterances. Pope Francis does not need to raise his voice when he stresses the importance of listening.

None of us is so important to know the full story. Surely leadership is about inspiring and encouraging people, especially offering the hand of friendship and a smile to the poor? And then meaning it.