The name Muhammad has seen biggest rise in popularity in 2016 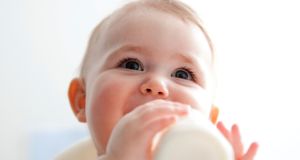 James was the most popular name for newborn boys last year, with Emily the most common name chosen for new baby girls.

The name Muhammad has seen the biggest increase in popularity between 2015 and 2016. The name jumped up 36 places in the list of popular baby names registered, to become the 83rd most common in Ireland last year.

In 2015, 58 newborn babies were called Muhammad, this increased last year to 85 babies, according to the annual figures from the Central Statistics Office (CSO).

Emily remains the most popular name for newborn girls, followed by Grace, Ava and Lucy. Sophie and Amelia were tied for the fifth most common girls' name last year.

Emily has been the most popular girls' name in Ireland since 2011. But the number of girls being named Emily has dropped from 626 in 2015, down to 490 last year.

Less common girls’ names that were registered by parents last year included Indigo, Romy, Peyton, and Blake. In families where both parents' nationality was Irish,  Grace was the most popular  name for girls,  and Jack  the most common for boys.

Murphy was the most common surname  last year for newborns, followed by Kelly, O’Brien, Ryan and Walsh.

Girls’ names rising in popularity this year included Aria, Harper and Heidi, which all broke into the top 100 most popular names. Parents are more original when naming baby girls,  the CSO found, with a wider variety of names registered for newborn girls than boys. Overall, more boys were born last year, with 32,819 boys registered, compared to 31,078 girls.

The CSO also released the number of baby names recorded from 1966, and found that  50 years ago, John was the most common  name for boys, followed by Michael, Patrick, James and Paul.

The most popular girls' name from 1966 was Mary, followed by Catherine and Margaret, historical records examined by the CSO found.

If you are reading this on our app go here to check the full list.

Heavy rain forecast for Monday night may lead to flooding, forecaster warns 22:02
All faith communities call for public worship to be allowed if Level 3 introduced next week 21:49
Pensioner tells how his life has become a hell since son-in-law attacked his family 21:41
Family of woman who died in road collision settles court action for €550,000 21:23
Former minister for housing backs co-living ban 21:18