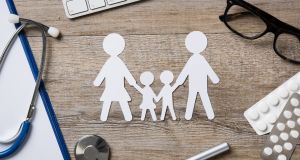 The Irish Medical Organisation criticised the lack of targets for new hospital beds, and claimed the proposal for free GP care for all in five years was unworkable. Photograph: Getty Images

A newly-published cross-party blueprint for the future of the health services has received a mixed reaction from groups active in the sector.

The Irish Congress of Trade Unions (Ictu) , patient groups and charities working in health welcomed the findings of the Oireachtas Committee on the Future of Healthcare, but professional bodies representing doctors and pharmacists were critical.

An additional €5.8 billion should be spent on the health service over the next decade in order to provide equal access to universal healthcare, the committee recommends.

The report calls for free GP care and free hospital care for all, as well as cuts to or abolition of health charges. The committee agreed a vision of a universal single-tier health and social care system to replace the current mix of public and private.

Minister for Health Simon Harris promised to bring the report he commissioned to the next Cabinet meeting in advance of a full Dáil debate in June.

Speaking at the launch of the report in Leinster House, committee chairman Róisín Shortall said too many people’s lives had been damaged by a lack of adequate healthcare, and too many people had been impoverished by having to bear the costs of services that should be available free to all.

Recommendations include guaranteed maximum waiting times for appointments and procedures, a massive shift in services from hospitals to primary care delivered in the community, and the phased elimination of private care in public hospitals.

Every Irish resident would be provided with a “carta slainte”, or healthcare card, which would entitle them to access to a wide range of services based on need rather than ability to pay.

The expansion of primary care would see more provision of home care, greater access to diagnostic tests and free GP care for all.

The maximum waiting time for an inpatient procedure would be 12 weeks, and for outpatient appointments 10 weeks. Patients would have to wait no longer than 10 days for a diagnostic test.

The Irish Hospital Consultants Association (IHCA), whose members’ co-operation will be vital to the implementation of the report, criticised its proposals. The report “fails to articulate the need for significant investment in the public health system”, and did not contain realistic solutions to the shortage of hospital beds.

The proposal to eliminate private care from public hospitals would reduce capacity rather than expanding it, according to IHCA president Tom Ryan.

“There is a significant risk that the private income to public hospitals will be removed with little if any replacement funding, and that the public health system will be impoverished and risk a catastrophic failure during a future wintertime crisis as a consequence.”

The Irish Medical Organisation also criticised the lack of targets for new hospital beds, and claimed the proposal for free GP care for all in five years was unworkable.

The report, drawn up after 11 months of meetings and consultation, was approved by 13 of the committee’s 14 members. Solidarity TD Mick Barry, who dissented, described the report as a missed opportunity to provide “an Irish NHS” involving no patient charges.

It is envisaged the phasing out of private care in the public system would take place over six years. An independent impact analysis is planned to identify any adverse effects from this process.

The report envisages the investment of €2.8 billion over 10 years to build up capacity, expand entitlements and reduce out-of-pocket costs for patients.

A further €3 billion would be invested in a transitional fund to develop infrastructure such as IT/e-health and expand the provision of doctors and nurses.

The committee failed to reach agreement on funding the plan, but the report says the health system would continue to be funded by general taxation.

An implementation office would be set up under the auspices of the Taoiseach’s office to develop plans to roll out the proposals.

Siptu called on the Government to implement the committee’s findings by “getting on” with the recruitment of additional staff needed for implementation.

Ictu described the report as a “significant milestone”, and said it needed to be fully funded.

The Private Hospitals Association has criticised the report for having “too much ideology”.