‘This has to stop, it’s horrible’: locals react to latest Dublin killing 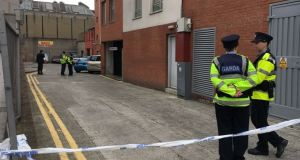 Gardaí at the scene of the shooting at Sheridan Court in Dublin city centre. Photograph: Sorcha Pollak

Local residents gathered near the scene of the latest gangland killing in Sheridan Court in Dublin city centre on Tuesday morning, where a man was found shot dead in an underground car park.

Gardaí arrived at the scene shortly after 10am on Wednesday morning where they discovered a man with gunshot wounds to his body in a VW Golf. The man was pronounced dead at the scene.

A small group of women watched from the first floor of the Sheridan Court apartment block on Dorset Street as gardaí cordoned off the entrance to the carpark. The voices of children playing games in the yard of St Mary’s Primary School across the road from the scene of the crime echoed down the street, while a couple of elderly residents cautiously poked their heads out their front doors as news of the attack filtered through the building.

A women living in the apartment block over the car park where the incident occurred said she was feeling very frightened following the news of the shooting.

The woman, who would not give her name, said she had lived in the apartment block for more than 40 years but was feeling increasingly nervous about the spate of gangland-related killings in the north inner city.

“I used to go down to that car park a lot with my husband, my husband and son park their cars there. I’d feel nervous about going there now,” she told The Irish Times.

“I just feel sorry for whoever he is and his family. What is going on in the world now with all the drugs?”

A man who also refused to give his name and lives in the area said he saw Garda cars arrive at the scene as he was getting off the bus on Wednesday morning. He said the underground car park was only used by residents in the Sheridan Court and Sheridan Place apartment block and that a swipe card was needed to gain entry.

“I’m just sick of all of this. I was walking to the post office when I saw the gardaí. This has to stop, it’s horrible.” The man says he is planning to move out of the north inner city and is searching for a home in Co Meath which he feels will be safer for his children.

“There are loads of people moving because of this. People who have lived here all their lives are scared, the ordinary Joe Soap is terrified. Most of my family have left and gone to America or Canada, they’re sick of this shit.”

The man added that some media outlets were playing a role in “stirring up” the recent violence through their reports on gangland killings. “They’re taking photos of people’s homes and showing where people live, they’re stirring it all up.”

Across the road from the Sheridan Court apartment block a small group of men had gathered outside the tricolour painted Long Island Bar.

An elderly man who had just heard the news blamed Garda cutbacks for the spread of gangland killings. A resident of Sheridan Court, he said he was feeling very uncomfortable about the news of the shooting.

“There aren’t enough gardaí on our roads, we need more feet on the streets. I live on my own and I’m nervous that some could just pop out of nowhere. You can’t trust people anymore.”

Dublin city councillor Christy Burke described the Sheridan Court apartments as “one of the best complexes in Ireland”.

“It’s a shock to this community because Sheridan Court... is a settled community, a proud community. There’s never anything anti-social and there’s never been any type of unacceptable behaviour,” said Cllr Burke on his way into the building to meet with residents.

Cllr Burke called on both sides of the Kinahan-Hutch gangland feud to “come to the table”, meet with “professional people who are willing to negotiate” and appealed for no retaliation following Wednesday’s shooting.

“The misery that an execution or murder creates, it interferes with a whole family structure on all sides, north and south of the Liffey. Remember, all of the people who lost their lives, all of their relatives and lots of them are decent and hard working people.”

Local councillor Nial Ring who was at the scene on Wednesday morning said:

“Our priority and the guards priority is to have this feud stopped and let us get back to normal living.

“There’s children going up and down to school here today...and they have to see another crime scene and we find that unacceptable.”

He said gardaí had made made huge progress in tackling gangland crime “and my constituents would be hugely grateful to the guards for the work they’ve done”.

“Unfortunately, like in other incidents like Manchester, you can’t have every possible crime covered before it even takes place.

“We don’t want this on the streets of the north inner city, we want normality. We don’t want children de-sensitised, that every time they go to school there’s a Garda checkpoint”, he added.

Gardaí are appealing for witnesses or anyone with information who was around Dorset Street or Clonliffe Avenue between 7am and 10am on Wednesday to get in touch. Gardaí are particularly calling on taxi drivers or other motorists who may have camera recording equipment on their dashboards or elsewhere in the vehicle to contact Mountjoy Street Garda station on 666 8600, the Garda Confidential Line on 1800 666111 or any Garda station.