‘Irish Times’ columnist and environmentalist among 18 people recognised by RIA 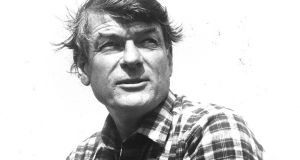 Michael Viney: “My research is reflecting other people’s work.” Photograph: The Irish Times

The Irish Times columnist, environmentalist and natural-history author Michael Viney was among 18 people whose election to the Royal Irish Academy was marked on Friday in recognition of their unique contribution to education and research.

Viney left Dublin in 1977 and moved with his family to a house with an acre of land south of Westport, Co Mayo, and began writing his Another Life column for the newspaper. It developed from reporting experiments in self-reliance to making observations that reflect a deep concern with nature and ecology, and is illustrated with his drawings and paintings.

Born in Brighton, England, he wrote “incisive and influential articles on social problems in Ireland” for The Irish Times during the 1960s, the RIA noted.

Among his 10 books is Reflections on Another Life (2015), a selection of columns from the past four decades. His book A Year’s Turning (1996) showed his creativity as an artist and a growing empathy with nature. Among television films he devised and directed in the 1990s were documentary profiles of Michael Longley and Tim Robinson shown by RTÉ and Channel 4.

“Viney has continued to offer his peerless insights into all aspects of the natural world, rooted in his home on Mayo’s Atlantic edge but extending to the stars,” the environmentalist Paddy Woodworth wrote in 2016, in one of his articles for The Irish Times. Viney’s wife, Ethna, focuses on readers’ nature observations through her accompanying column, Eye on Nature, through which readers can offer images, questions and insights.

His love of his Mayo surroundings is a thread through much of his writing. He once observed: “Even in our early years at Thallabawn, when so much in life was extraordinary, it seemed unlikely there were flamingoes on Corragaun Lough, behind the dunes. A summer visitor had taken his children boating there in a little rubber dinghy. ‘Daddy, what are those big, pink birds?’ and he’d almost tipped over, twisting round to see.”

His daughter, Michele Viney, attended the RIA event in Dublin on behalf of her 84-year-old father. “We are so proud of him,” she told The Irish Times. Thallabawn beach, she said, was “the most perfect place on Earth” because of the huge sky that went with the landscape, the feeling of space and gorgeous light. Its amazing qualities were evident even in bad weather.

Speaking from his home, Viney said the honour was something he never considered, as he always thought such recognition “came at the end of a long academic life”, and especially as he had left school at the age of 16 and never went to university. He said he is learning all the time, “reading other peoples’ books and hunting through their indexes. My research is reflecting other people’s work.”

The RIA’s president, Prof Peter Kennedy, said Ireland “should be immensely proud of these women and men who have brought international academic distinction to our country”.

Among those elected to the RIA was Máire O’Neill, a leading cryptography expert and the youngest professor to be appointed at Queen’s University Belfast, at the age of 32. Sir Stephen O’Rahilly, who has completed pioneering work on causes of obesity and type-2 diabetes, was also elected. Born in Finglas, Co Dublin, he is based at the University of Cambridge.