Cyclist dies after crash with car in Co Mayo

Man in 50s was taken to hospital but died last night 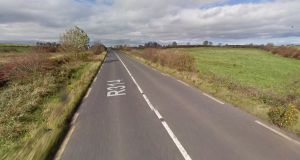 A male cyclist has died after a crash with a car Co Mayo on Sunday.

The incident happened on the R314 at Rathroeen near Ballina, Co Mayo on Sunday May 28th 2017 at approximately 5pm.

The man in his 50s received serious injuries and was taken to Mayo University Hospital, Castlebar where he died on Tuesday night.

A spokesman said Garda forensic collision investigators had examined the scene and the local Coroner had been notified.

1 Coronavirus: Ten more deaths confirmed in Republic
2 People should carry ‘evidence’ of travel reasons if exceeding 2km limit
3 Trump boasts of coronavirus ‘ratings’ as top expert warns of up to 200,000 US deaths
4 Coronavirus: Husband unable to say farewell to wife of 51 years
5 Maureen Dowd: Coronavirus has made a national shrink of Andrew Cuomo
Real news has value SUBSCRIBE