‘The crowd were unbelievable’: Dublin shines on marathon day

The capital’s people show their supportive side for the race’s 22,500 competitors 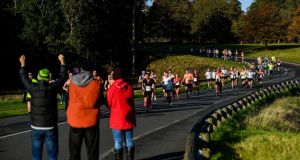 Spectators cheer on the runners as they make their way through the Phoenix Park during the Dublin Marathon on Sunday. Photograph: Sam Barnes/Sportsfile

Anyone searching for signs that the world has not yet been irredeemably polluted by toxic negativity would have done well to look towards the footpaths lining the route of Dublin’s 40th marathon where positivity levels were nearly off the charts.

Many of the well wishers were waving little blue hand clappers handed out by a no doubt well intentioned person who had clearly not heard about concerns over single use plastics.

There were no blue clapping hands when Billy Harper ran his first Dublin marathon 40 years ago. He was among the first wave to make it to the Phoenix Park three miles in and one of just 13 people to compete in all the Dublin races.

As he swigged from a bottle of water and drew breath on the North Circular Rd he told The Irish Times he was feeling good. “It’s going okay so far but we’re only a couple of miles in,” he said.

“Jaysus, instead of telling me I had two and a half miles done some just told me I have another 24 miles to go,” another runner wheezed as he followed closely in Harper’s footsteps.

By the time runners had arrived in nearby Stoneybatter, clothes were coming off as temperatures climbed and the road was peppered with hats, gloves t-shirts and hoodies most of which will end up with homeless charities.

One woman was ahead of the chasing pack and walking the route with an armful of clothes as runners raced past her. “I have five children and these will come in very useful,” she said.

“I’ve done four marathons but won’t be doing any more for a few years,” Cooke said gesturing at her infant daughter. “All the way around people are so supportive. I think that is what makes it so special in Dublin.”

Special it might be but many of the runners crossing the finishing line still looked as if they were leaving a battle zone and struggled to pull on trainers and tracksuit bottoms as riddled with cramp they hobbled into the arms of loved ones.

But while there was pain and suffering evident on many faces there was joy too.

Othmane El Goumri of Morocco, who won the race in a record time of 2:08:05 was among the most joyful. Motu Gedefa took the women’s title in 2:27:48 while Patrick Monahan secured the wheelchair title in 1:39:50.

Fearghal Delaney from Armagh was pretty happy too .

“I finished in just under 2:43,” he said. “It’s unreal I’m absolutely delighted with myself. I’m going to go to O’Donoghues now for a pint,” he said and ambled off, not a bother on him.

Ernesto Asensio from Barcelona was draped in the Catalan flag and had just completed his 25th marathon and finished alongside Delaney.

“The crowd were unbelievable today,” he said. “I know the course well and the weather was perfect although the headwind at the end was and a bit nasty. I was looking for a group to shelter in but couldn’t find anyone.”

While Emma Dalzell who had travelled from London ran her race solo she never felt alone “It’s been a great day,” she said. “We had the best of weather and the best of support all along the route. It was just amazing.”