Green councillor Pippa Hackett to be elected a senator next month 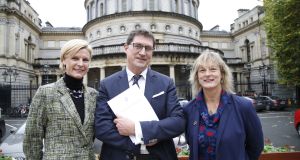 Councillor Pippa Hackett of the Green Party will become a senator next month after no other candidate was nominated to contest the byelection for the Upper House.

Ms Hackett, a county councillor Offaly and the party’s agriculture spokeswoman, was the only candidate to submit a nomination for the seat which was vacated by her party colleague Grace O’Sullivan.

Ms O’Sullivan was elected to the European Parliament in May.

The other political parties decided not to nominate any other candidate.

Ms Hackett runs the family farm, which specialises in organic beef, in Geashill, Co Offaly, with her husband Mark. They have four children, aged 8 to15.

She was elected to Offaly County Council for the first time in this year’s local elections. Ms Hackett joined the Greens three years ago on the recommendation of her neighbour, Irish Green Party founder Christopher Fettes.

She said her election in a rural constituency was a “good thing” as the party was perceived as urban-focused while she can represent people from farming and rural backgrounds.