The Brexit negotiations could be the easy part

The treaties to be drawn up involve hideously complex ratification processes, with profound implications for Ireland 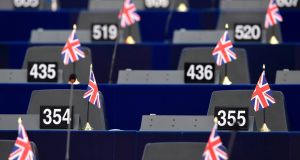 Life after Brexit: MEPs will be asked to vote by simple majority to approve or reject the withdrawal treaty. Photograph: Frederick Florin/AFP/Getty

So far the Brexit debate has focused on the politics of Brexit, the negotiations necessary to bring it about and the consequences of the United Kingdom’s departure from the European Union, both for itself and for everyone else.

There has been far less analysis, if any, of the hideously complex ratification processes that will be required to give effect to the treaties that will need to be negotiated over the coming years. This is not a moot point.

There are many barriers to overcome before the withdrawal agreement – the treaty that will provide for the UK’s exit – and the new-arrangement treaty, which will lay out the future relationship between the UK and the EU, are ratified.

That path is tortuous. Yes, the treaties must be approved by Westminster and by the parliaments of each of the remaining 27 states. But they must be approved, too, by the European Parliament and, perhaps, by up to 11 regional assemblies scattered across the union.

The first challenge is securing the consent of the European Parliament to the outcome of the withdrawal-agreement talks. MEPs will want to ensure that it reflects the April 2017 resolution that set out the parliament’s priorities and red-line issues.

MEPs will be fully briefed about the negotiations at critical junctures, so the outcome of these talks will not go cold to the European Parliament for a final decision. The MEPs, including the 73 MEPs representing districts across Britain and Northern Ireland, will be asked to vote by simple majority to approve or reject the withdrawal treaty.

Once the European Parliament has approved that treaty, the European Council – member countries’ heads of state or government, plus the president of the European Commission – will be asked to approve it. Here a decision by qualified-majority vote of the EU-27 is required. But the council cannot ratify international treaties. That is a job for member-state parliaments – and could be trickier if serious divisions emerge within the EU-27 on the best route forward.

Under the Constitutional Reform and Governance Act, brought into law in the final days of Gordon Brown’s Labour premiership, all international treaties involving the UK require parliamentary scrutiny before entering force.

The House of Commons and House of Lords will therefore put the draft withdrawal treaty under the microscope over a gruelling 21 sitting days before deciding whether to ratify the terms of the UK’s exit.

If the Commons or Lords votes against ratification the UK government must explain why it wants to proceed with ratification.

If the House of Commons subsequently votes against the terms of withdrawal – and anything is possible given the results of this month’s extraordinary UK general election – the UK will be unable to ratify the treaty.

In that case the EU-27 will not be asked to proceed with their internal ratification procedures. In such an event aArticle 50 of the Treaty on European Union applies, and the UK will have no option but to exit the EU in a legal and political vacuum.

If the House of Lords votes against the withdrawal terms but the House of Commons does not, then Brexit will be delayed by a few weeks, but it will not prevent the UK government from ratifying the treaty.

Westminster will be exhausted long before the exit treaty reaches it, as its committees will first have to review UK  legislation in the context of the Great Repeal Bill

Westminster will be exhausted long before the exit treaty reaches inside its walls, however, as its committees will have to spend a vast amount of time over the coming 18 months reviewing the UK’s domestic legislation in the context of the Great Repeal Bill, which will remove the UK from European Union jurisdiction and copy EU law into domestic law, to avoid what the government calls a black hole in the UK statute book.

Many MPs and, to a lesser extent, members of the Lords will have to pay more heed this time to the treasury’s guidance about the economic costs of Brexit – guidance that was given last year, and ignored before the referendum.

A qualified-majority vote among the remaining 27 EU member states is required to approve the withdrawal agreement with the British. The agreement of every EU state is not needed.

This applies when their countries’ leaders are sitting in Brussels, including Taoiseach Leo Varadkar if he still occupies Government Buildings, but, also, it means a majority voice from EU parliaments. No one has a veto.

In practice 20 of the remaining 27 member states must approve the terms of the UK’s withdrawal: 72 per cent of the states, representing at least 65 per cent of the population of the European Union.

So the Republic of Ireland could oppose the withdrawal agreement because, for example, some of the Government’s red-line issues were not adequately resolved, but it could not prevent the EU’s overall ratification of the treaty.

The withdrawal treaty does not come into effect until all 27 member states have finished ratification. In the event of a delay the European Council has the option of extending the two-year deadline for the conclusion of Brexit talks.

Linking withdrawal to what comes afterwards

European Union treaties will cease to apply in the UK from the day the withdrawal agreement comes into force or, failing that, two years after article 50 was triggered, unless the European Council decides unanimously to extend this time frame.

The EU’s target date for the UK’s withdrawal is midnight on March 30th, 2019. In April the European Council acknowledged that transitional arrangements, including a prolongation of the community acquis – which is to say the accumulated legislation, legal acts and court decisions that make up EU law – will be considered “to the extent necessary and legally possible”.

But there is no guarantee that the new-arrangements treaty – an entirely separate agreement that will govern the UK’s relationship with the EU bloc for years and decades afterwards – will be agreed at the same time. Indeed, it is quite possible that it will not be.

Although a matter for negotiation, the extent of the overlap between the terms of the UK’s withdrawal and the terms of the relationship it will have with the European Union afterwards needs to be clarified as a priority.

Surely the date of withdrawal and the date of the new arrangement should be the same. The point would seem obvious, but it is far from guaranteed as things stand.

It is crucial for UK and EU negotiators to pinpoint precisely the directives, regulations and decisions that may be the subject of transitional arrangements.

So let us fast-forward to 2020, or thereabouts, when talks on the draft new arrangements are concluded on the basis of a negotiating brief approved by the European Council.

This brief should be ready by the end of 2017. It is a working assumption that the scope of this treaty will cover policy areas, including trade, where the UK, as a third country, wants to have transitional arrangements.

If the new-arrangement treaty is not a pure trade deal – where the European Union, not member states, has full competence – then the draft is a “mixed agreement”. In this case it must be ratified and approved by all 27 member states, and perhaps by 11 regional chambers.

The consequences of even one of 38 national and regional parliaments vetoing the new UK-EU arrangement have not even been considered. This is a serious issue

The risks and consequences of even one of these 38 national and regional parliaments vetoing it have not even been considered as a scenario. This is a serious issue.

Would the Dáil vote for a post-Brexit deal, for example, that introduced a hard Border and did not adequately protect the Irish or Northern Irish economy by way of compensation measures?

Would other states have red lines? Would the parliaments of eastern European countries be prepared to sign off on a deal if they were not satisfied that their citizens working in the UK were being treated fairly?

If the new-arrangement treaty is blocked at the last minute, and the withdrawal agreement ratified with a predetermined exit date, then legal, economic and social Armageddon would result in the UK, in the Republic of Ireland and across the EU.

A vetoed treaty would leave the UK incapable of importing or exporting or functioning as a modern economy. The alternative – a World Trade Organization-type agreement with limited free trade, tariffs or both – would take many more years to conclude.

This scenario suggests, or offers at least fair warning, that negotiators should confine their attention to a treaty dealing with trade and customs only in an attempt to avoid potential ratification complications.

Another significant variable in this political geometry is the response of the Court of Justice of the European Union, which could decide that aspects of the draft Brexit treaties do not conform to EU law.

The court has ruled on aspects of such agreements in the past. Last month it ruled on the EU-Singapore Free Trade Agreement, where it insisted that the agreement required the approval of member states.

An added complication in the Irish case is the Belfast Agreement. If the withdrawal treaty, the new-arrangements treaty, or both require changes to the 1998 deal, then a cross-Border referendum may have to be held.

The questions posed may only be technical, but a bad outcome to the Brexit negotiations might create political pressure to extend the scope of the questions put to the public.

For example, it could be argued that voters should be then asked if they wanted Northern Ireland to become a full member of the EU after unification with the Republic, or by way of a federal arrangement, as was envisaged by the European Council’s decision of April 29th, 2017. No doubt other questions may have raised their heads by the time this stage is reached.

A discussion is urgently needed on the implications of such a development. Detailed consideration of KLC Consulting’s report, from November 2015, on modelling Irish unification might be a useful starting point.

The potential risks and consequences associated with various outcomes and scenarios for the institutions, communities and businesses on the island of Ireland need to be far more fully explored.

Everything about the next two years is much more complicated than most people realise. It is not only that people do not have all the answers but also that we are still unsure if we even have sight of all of the questions.