Unification of Ireland ‘could bring in €36.5bn in eight years’ 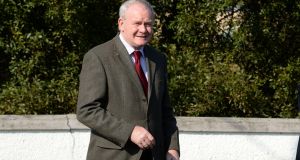 Political and economic unification of Ireland could potentially deliver a €35.6 billion boost in GDP for the island in the first eight years, according to a US study of reunification by two prominent academics.

The economic research, launched in New York, suggests economic unification could possibly deliver a more sizeable boost in economic output and incomes in the North, with a predicted 4-7.5 per cent long-term improvement in GDP.

The study, which involved a number of researchers led by Dr Kurt Hübner, director of the Institute for European Studies at the University of British Columbia, also highlighted that the Republic would see a more modest boost of between 0.7 to 1.2 per cent in GDP per capita.

These models assume five key scenarios which would play out as a result of unification.

First was the harmonisation of the tax systems across the island with the North adopting the tax rates and regulations of the Republic, which the researchers said would encourage more foreign direct investment in Northern Ireland.

The second assumption was that unification would reduce trade barriers and cut transport and currency transaction costs between the North, the Republic and other euro zone countries.

The model also presumed Northern Ireland would adopt the euro, a move which it said would in the short term boost economic output because of the strength of sterling.

Finally, the model also looked at current fiscal transfers and noted that Northern Ireland’s current fiscal deficit – more than £9 billion – would have to be financed by the Republic.

However, it also notes that unification would create just one government structure and associated savings could in the long term be reinvested in the private economy or public projects.

According to Dr Hübner, the results show that the Northern Ireland economy would enjoy significant long-term improvements from unification.

“While these effects occur in a static global economic environment, under ideal political conditions, they underline the potential of political and economic unification when it is supported by smart economic policy.”