Troubles victims: ‘Daddy saw me in the body bag and dropped dead of a heart attack’

Peter Heathwood, campaigner for a pension for those injured in the Troubles, tells his story 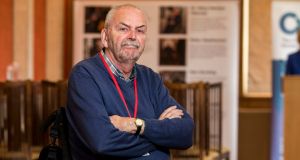 What happened to Peter Heathwood – one of the campaigners for a pension for those seriously injured in the Troubles – is almost a “tale of Gothic horror”, said one of his friends this week.

Listening to Heathwood tell his story – which he does with a dispassionate lack of self-pity – you can see how it is an accurate summation of his terrible experience and that of his family.

It was September 1979. He was married with three young children living in a house on the Cliftonville Road in north Belfast. He had changed his job from teaching history to working in mortgages and pensions and was on double his previous salary.

“Things were looking good. And then all of a sudden, bang! I was down to living on benefits. Life’s what happens when you are busy making plans,” he says drolly.

The top floor of the house was rented out to a taxi driver, he adds, setting a scene that for three decades was familiar on Northern Ireland news reports.

“Then the doorbell rang,” he recalls. “That was no big deal. My wife, Anne, got up to answer the door; the next thing I heard her squealing, ‘gunmen, gunmen’.

“A man in a balaclava with a gun in his right hand had my wife by the hair. He pulled her up the hall into a small room in the house. When he got into the room he saw me at the last minute, and let go of the door. I whacked him with the door, and got him out and put a bar on the door.

“But a second man who had been in the hall fired through the door and got lucky. He hit me in the shoulder, the bullet went down through my body and hit my spine. It lifted me up into the air, just like in the movies. When I hit the floor I tried to get up again but my legs wouldn’t work. Then I passed out.”

The ambulance men could not get the gurney into the wee back room. So they put me in a body bag to carry me out

The police and ambulance were called and his family who lived in south Belfast were also told. Loyalist gunmen were believed responsible and the intended target was the taxi man living in the top-storey flat.

Heathwood, a Catholic, who was then 27 continues: “The ambulance got there just as my father and brothers and sisters arrived from the other side of town. The ambulance men could not get the gurney into the wee back room. So they put me in a body bag to carry me out. Daddy saw me in the body bag and thought I was dead and dropped dead of a heart attack. His last words were, ‘Oh, my poor Peter.’

“I did not see or witness any of this because I was totally out of it. I was in hospital for a year, paralysed, a paraplegic in a wheelchair.

“I did not see what my wife and children saw: their father with blood pouring out of him, then their grandfather dying in the hall, the smell of gunsmoke, policemen all over the place. That must have been horrific for my children to see, never mind my wife, God rest her. I never saw that, so I am lucky that way I suppose.”

A big man, his body weight dropped to seven stone. “I was dead on two occasions – the doctors told my wife; they said I would not be alive in the morning. But I am still here. Nobody could tell me that Daddy had died for over a month in case it flipped me over the edge.”

And it didn’t end there. “My poor wife never forgave herself for opening the door that night. We had many conversations on how to get beyond that, but she just couldn’t. She used to say, ‘I opened the door, I let them in, I let them in.’ She took to drinking and was dead by the time she was 51, which was 13 years ago.

“The effect of violence on our family was pretty drastic, and that is not to mention the effect on my brothers and sisters and on my mother,” he adds.

His two daughters and son, who are grown up and working now, also suffered great trauma – even now one of his daughters freezes every time she sees a man wearing a hoodie. “She only told me that recently.”

Heathwood is one of about 500 people severely physically injured during the Troubles who are seeking payment of special pensions that would range from £2,000-£9,700 (€2,224-€10,788) annually, depending on the extent of each person’s injuries. Some hundreds more are seeking similar payment for severe psychological injuries as a result of the Troubles.

That campaign has been running for more than 10 years but still the victims wait for payment. The issue has been bedevilled by disputes over how, under the definition of a victim, paramilitaries who suffered severe injuries also would be entitled to pensions.

The most cited example here is how Sean Kelly who was injured when planting the 1993 IRA Shankill bomb that killed 10 people – including another of the bombers Thomas Begley – would appear in line for such a pension.

Some families have said they would reject the payment if former paramilitaries got the pensions. It’s another of those so far intractable problems relating to how to deal with the legacy of the Troubles.

Former Northern secretary Peter Hain is trying to have the pension payment included in the Northern Ireland Bill currently going through Westminster. To get over the issue of paramilitaries receiving the payment, he sought in the House of Lords last Wednesday night to have included in the Bill a reference to victims only receiving the payment who suffered injuries “through no fault of their own and not at their own hand”.

He was advised, however, that such wording was not sufficiently legally precise.

Northern Ireland Office Minister Lord Duncan nonetheless told Lord Hain he was “very happy to confirm for the record that the intent and purpose of through no fault of their own is the principal criteria by which we will ensure victims will secure their pension”.

But whether the British government could exclude former paramilitaries from these payments would appear open to legal challenge as the Victims and Survivors (NI) Order 2006 makes no distinction between paramilitaries who were injured and those they injured in their attacks. A victim is described as “someone who has been physically or psychologically injured as a result of a conflict-related incident”.

Sinn Féin was clear last week that any payment should apply to “all seriously physically and psychologically injured” in the Troubles.

Whether and how this conundrum can be resolved remains problematic, while in the meantime hundreds of victims continue to be deprived of a very modest compensation for their suffering.

Heathwood, similar to other victims, feels it is unfair for them to be asked to state who should or should not receive payments. “That should be for the politicians to decide.”

But he believes it is a problem that can and should be solved. He says it is estimated that of the 500 suffering such injuries, about nine were former paramilitaries, although he accepts the figure could be higher. What is required, he adds, is some creative political thinking on the subject.

“Politicians should be looking for a Northern Ireland solution to a Northern Ireland problem. The whole peace process was finding ways around awkward things. They just have not been able to engage in this; they are using victims as a big stick to beat each other with.”

Heathwood is a quietly inspirational man with a remarkably positive attitude to life. In 1981 he started compiling an archive of Troubles television news reports which he recorded and is available online on the Cain (Conflict Archive on the Internet) website.

“I don’t believe in sanitising the violence. I believe it should be seen in all its horror,” he says. “It’s an archive which I hope will be of use to future generations here, that they can see the futility of violence, that it is just a waste of everybody’s efforts. I hope that the leaders of the future will see that when the flag-wavers of the future start whipping them up, that is not the road to go down.”

Heathwood moved to live in south Down in 1990 in his mother Rita’s county – “she is 89, she’s the matriarch”. He can drive and get around in his wheelchair. A pension would help.

“I am 67 now, I live alone. I don’t want to go into a nursing home. I want to be able to live independently but because I live on benefits I want that little bit of extra income to do things like get the grass cut, put a slate on the roof when the wind blows it off, get somebody in to do a bit of cleaning, all those little things that help make me independent. It is not about holidays in the Bahamas or anything like that; it is basically just to keep me independent.

“The worst thing you can let happen is the ‘poor me’,” he adds. “You just have to get on with life.”

Which he does. “I have 14 grandchildren; they are a great joy. I look at them and I really feel lucky to be alive – knowing that I could be dead and not seeing them. There is a great sense of joy in being alive.”