Reforms for State’s tribunal system to be examined 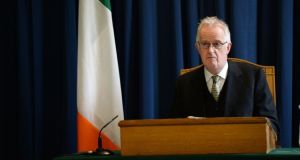 Options for reforming the State’s costly tribunal system are to be examined, Minister for Justice Charlie Flanagan has said.

Mr Flanagan said he would “be considering options for reform in conjunction with the office of the Attorney General” following a speech by Supreme Court judge Mr Justice Peter Charleton at the weekend, which was critical of how the system works.

The judge, who chaired the disclosures tribunal as it investigated claims about a number of Garda whistleblowers including former sergeant Maurice McCabe, told the MacGill Summer School that there were “clear and obvious dangers” in the way tribunals are run in Ireland, with the current system making the “functioning of tribunals close to impossible”.

Mr Flanagan said he was “very interested to read the comments of Mr Justice Charleton on the operation of tribunals and I greatly value his significant expertise in this area of public law”.

It is understood that officials in the Department of Justice will, after the autumn, consider the issues raised in the speech.

In his speech, he said the tribunal system had “become totemic and symbolic and is constantly in peril of toppling over”. He emphasised the difference in cost outcomes between the UK and Ireland, pointing out that the Leveson inquiry into journalistic phone tapping cost some £5.4 million, while the Iraq inquiry cost £10 million. The final bill for tribunals in Ireland regularly runs into the tens of millions, with the planning tribunal costing €150 million.

He said Irish tribunals are characterised by a “scrum” of lawyers’ involvement, with dozens of people given full “accused of murder” rights, and legal teams for each of them empowered to cross-examine witnesses, with questioning being the responsibility primarily of the tribunal itself.

In doing so, tribunals would, he said, become less like criminal trials and “the impulse to resort to judicial review and delay” would be diluted.

Delivering the annual John Hume lecture at the summer school, he said: “We have made public inquiries into something that they are not; a trial where only those who might be criticised have rights and we the people, paying for the entire process and with an urgent entitlement to know what has gone wrong in order to make our country better, have been forgotten.”