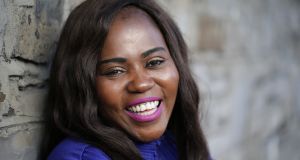 Ellie Kisyombe is a candidate for the Social Democrats in the upcoming local elections. FIle photograph: Nick Bradshaw for The Irish Times

The Social Democrats party is in crisis after its party chairman and vice-chair resigned in protest over the controversy surrounding local election candidate Ellie Kisyombe.

The executive board members Joe O’Connor and Carly Bailey resigned after the party decided to conduct a “review” of Ms Kisyombe’s story.

It is understood that the national executive vote on the review was 9-2 in favour of carrying it out.

A report in last week’s Sunday Times alleged that Ms Kisyombe, who is seeking a place on Dublin City Council in the May election, had arrived in Ireland later than she had stated in media interviews.

Ms Kisyombe is originally from Malawi and has spoken of her experience of living in the direct provision system for much of the last decade.

A spokesman for the Social Democrats confirmed “with regret” that the resignations had taken place. In a statement, a spokeswoman for the party said: “The co-leaders wrote to the national executive and expressed concern at the allegation that there may be some inaccuracies in Ellie’s back story, while also appreciating the complexities and severe difficulties posed for those caught up in the asylum process. As a result, the national executive subsequently met and has decided to carry out a review to work through this with Ellie.”

An email from party chairman Mr O’Connor, seen by The Irish Times, states that he has decided to “step aside as party chairperson with immediate effect”.

It is understood that grave misgivings had emerged at party leadership level over Ms Kisyombe’s story, and the fact that she had been advised by her lawyers not to answer questions about her immigration history.

A clear conflict has emerged between members of the executive board over the path to be taken, emails seen by The Irish Times show.

“This is not something which I take lightly, and it is a situation that I have been desperately hoping could be avoided over the past week,” Mr O’Connor wrote.

“However, I cannot stand over the decision made by the national executive last night, or how the party intends to proceed from here.

“I believe we have been forced to view this issue through a narrow lens, and as a result seem intent on pursuing a course of action which I believe is wholly inconsistent with the interpretation of a majority of our members and supporters, and will as a result inflict irreparable damage to the party in my view.”

Mr O’Connor wrote that alternatives to the course of action chosen by the Social Democrats were and are available, “if our response to this issue had not been framed with a pre-determined outcome from the start”.

He wrote that his “direct experience with how we approached the issue is one which I cannot accept”.

“Over the past couple of weeks, I also believe irreconcilable gaps have emerged between party officers and leaders on how the party exercise good governance and due process for elections,” he wrote.

He concludes by stating that “it may be too late but I would urge the party leadership to consider changing course, for the sake of our candidates and the party’s continued survival”.

Ms Bailey, who is vice-chair of the party and a general election candidate for the party in Dublin South-West has also resigned her position on the executive board. In her resignation letter, she makes clear that she fundamentally disagrees with a decision taken by the party leadership to issue a statement regarding the issue to the Sunday Times in tomorrow’s edition.

She says that he “cannot stand over a decision which includes a statement that will go to the media, which in effect could and will be construed as the party essentially abandoning a candidate and especially one so vulnerable as a person living in direct provision”.

“I have tried to work with everyone to find a resolution to this. I am as aware as anyone how critical this has been to us as a party. I am very disappointed that both Róisin and Catherine are of the opinion that the national executive has failed in its duties to do so this week, given the number of hours many of us have put in to try and find a way through this.

“I joined this party in the belief that the Social Democrats were different. I cannot describe how devastated and disappointed I am that we have ended up here.”

She writes that she “cannot stand over effectively what feels like appeasing the opinions of political correspondents over that of many of the members of the national executive, our candidates, our members and our supporters”.

“It is also clear to me that the leaders remain convinced that Ellie is unviable as a candidate. Upon reflection this morning, I cannot see how this matter can be reconciled with such polarising views.”

She concludes with the hope that “the party remains intact”.

The issue has caused major division within the party, with the Dublin Central branch on Saturday evening contacting members to affirm its support for Ms Kisyombe.

An email sent to party members said: “The Dublin Central branch of the Social Democrats have today reiterated their full support for their selected candidate for the North Inner City Ward in the 2019 Local Elections, Ellie Kisyombe.”

“For legal reasons Ellie was, and remains unable to speak about her application, or any issues that have been raised in the Sunday edition of a national newspaper.

“This places Ellie in an extremely complex situation, but she looks forward to being able to clear her name once leave to remain has been granted.

“We also extend our sincerest thanks to our colleagues Joe O’Connor, Carly Bailey and the members of our party’s National Executive who’ve demonstrated immense leadership in preserving the values upon which our party was founded.

“Dublin Central Social Democrats remain dedicated to supporting our friend Ellie Kisyombe’s candidacy, alongside Carol Deans, for local election and would be both honoured and proud to have such fine candidates represent the North Inner City, as new and diverse voices for transformative politics.”

Mr O’Connor said that he did not wish to make any comment at present. Efforts to contact Ms Bailey were unsuccessful.