‘Special place in hell’ for those urging border poll without plan, says Eastwood 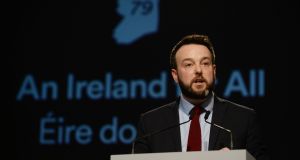 A special place in hell will be reserved for those who call for a border poll without a plan to deliver it, the SDLP leader has told the Fianna Fáil Ardfheis.

Colum Eastwood also said that “we all have a duty to tell our unionist neighbours ‘you belong to this place every bit as much as I do’, therefore you have the very same right to shape the future of this island.

“They also need to hear that while we want to shape the change ahead, we want to make Northern Ireland work right now.”

The Derry MLA received a standing ovation after his speech to an audience of about 300 Fianna Fáil members during a debate on Brexit and its implications.

There was sustained applause when he echoed European Council leader Donald Tusk’s remark about Brexiteers to take a potshot at Sinn Féin.

On February 6th, Mr Tusk said those who promoted the idea of Brexit without any sense of what was to come next face “a place in hell”.

That party has repeatedly called for a referendum on a united Ireland and insisted that in the event of a no-deal Brexit there should be a border poll.

But Mr Eastwood said that as the centenary of partition in 1922 approaches, “meaningful reconciliation between the peoples of this island must remain our top priority”.

The SDLP leader, whose party is now in a partnership with Fianna Fáil, said that for any real republican, there was no pathway towards a new Ireland without an Assembly in Stormont.

Brexit had changed everything to do with issues of identity, belonging and culture.

He said a new Ireland should be about delivering prosperity and fairness for all.

But “we will only succeed in reaching that new Ireland if we first provide it with definition and detail.

“And no referendum should be called until that work is done.

“There will be a special place reserved in hell for those who call for a border poll in Ireland with no plan and idea on how to actually deliver it.”

He further criticised Sinn Féin’s abstentionist policy in Westminster. Sinn Féin has seven seats in the UK government but its MPs do not attend the parliament. The SDLP failed to secure a seat in the 2017 election.

“There is no point saying you oppose Brexit if you’re not prepared to turn up and vote against it,” he said to more applause.

“This country is in the middle of a national emergency.

“How can anyone use the pretence of patriotism to avoid their responsibilities to protect the citizens of this country?

“I say this to Sinn Féin – it’s still an empty formula. Get in there and do your duty to this country or be forever defined by empty rhetoric.”

During the debate, economist Dan O’Brien said that in the event of a no-deal Brexit, Britain has indicated it will not impose any new taxes on goods coming into the UK at least in the initial stages.

But the Republic will have to apply EU rules on the importation of goods.

If the border is not policed on our side and goods are not checked and the tariffs the EU decides to impose on Britain are not collected on our border questions will arise about the State’s participation in the single market.

Sooner or later the French and Dutch and Belgians are going to start checking Irish goods, he said.

Once questions arise about the Republic’s participation in the single market, he claimed the country’s economic model would be under threat because 200,000 jobs with multinationals are in place because of Ireland’s access to the EU market.

1 Dublin gangland figures involved in Drogheda feud that killed 17-year-old
2 Mary Lou has to call for the smelling salts as SF councillor deals a knock-out blow
3 Murdered and mutilated: Keane Mulready-Woods and the teenagers of gangland
4 Teenage boys and organised crime gangs: A complicated dynamic
5 Who was murdered teenager Keane Mulready-Woods?
Real news has value SUBSCRIBE