Girl (12) in critical condition after boating accident in Limerick 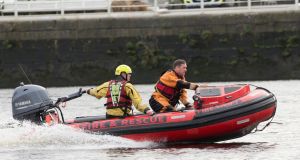 Fire and Search and Rescue personnel on Shannon river this Saturday morning after a boat capsized in front of Athlunkard Boat Club. Photograph: Liam Burke/Press 22

A 12-year-old girl was in a critical condition in hospital on Saturday night after she was trapped under a capsized rowing boat in the river Shannon.

Firefighters who discovered the boat, cut the girl’s hair to free her after it had become entangled in the boat’s outriggers, used to anchor the oars to the boat.

Firefighters administered first aid to the girl and took her ashore in their boat before she was taken by ambulance to University Hospital Limerick.

Three other girls all believed to be of a similar age, were in the boat at the time, and were understood to have been accompanied by a support boat.

The incident unfolded around 10am at a stretch of the river known locally as the Old Salmon Weir. It is understood they had set off earlier along the Abbey River from a local boat club.

The girl was expected to be transferred to Temple Street children’s hospital in Dublin for further treatment.

Danny Ryan, who witnessed the incident, said he would be “forever haunted” by the screams for help from the girl’s friends.

“I rang 999 and they put me through to the rescue services. I said the girl was under the water and [the girls] were screaming.”

“I couldn’t go to work. My stomach is sick over it. It was scary.”

“The current was going against [them]. They were saying her hair was caught underneath the boat. I couldn’t figure it out. I think, with the current, (the boat) turned sideways.” Mr Ryan said the boat was “broke in two”.

One of the girls “kept calling me, ‘help me, help me, help me’, and she was waving her hands. I ran down by the weir. I kept slipping and I was nearly going into the water.”

The firefighters, who are specially trained in water rescues, had been patrolling the river when they simultaneously received an alert from the Coast Guard. “They pulled her out of the water, and put her into the boat and they were doing CPR in the boat whilst they were driving. The rest of [the girls] got into another boat,” added Mr Ryan.

His wife Susan, who also saw the incident said: “I was roaring over to them that help was on the way”. She said one of the girls “screamed” at her to help.

A Garda investigation is under way. Part of the investigation will aim to determine whether the girls were wearing or had flotation devices in the boat.

FG and FF back transition payment for persons retiring before to right to State pension 00:10
Lobby to press politicians over referendum on right to home 00:05
Irish Times poll: Large majority want change of government 23:33
Animal welfare group raises concern over live exports 22:25
Two men questioned about attack where man was set on fire 22:01