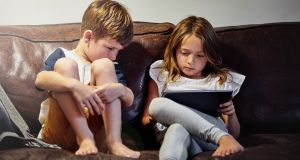 The digital age of consent has recently been set at 16. File photograph: Getty Images

Big tech companies will have to work harder to confirm young people’s age when they go online, Minister for Communications Denis Naughten has said.

Mr Naughten will be meeting senior executives from Facebook and Google on Tuesday after he addresses a conference on climate change in San Francisco.

The latest CyberSafeIreland annual report showed that many children were not telling the truth about their age online, said the Minister. He added that not enough was being done by the technology companies to authenticate the age of these children.

The survey was carried out among 5,000 children, parents and teachers who attended courses by the online safety charity.

Mr Naughten said in response to the CyberSafeIreland survey that he will be asking the tech executives what they are doing to ensure that age verification works properly.

He wants to hear from them “any new proposals or technical mechanisms that they could apply to their systems that would deal with this problem effectively.

“Age verification on social media sites is a complex area that all of us as parents need to be far more aware of. But we also need social media companies to make it significantly more difficult for underage children to set up these accounts in the first instance so I’ll be asking the companies what can be done in practical terms,” he said.

The CyberSafeIreland survey found almost 70 per cent of children between the ages of eight and 13 own a smart phone and are on social media.

Nearly two-thirds of teachers (62 per cent) have to deal with at least one online safety incident annually and a third dealt with between two and five incidents over the last academic year.

CyberSafeIreland chief executive Alex Cooney said many nine-year-olds are likely to own a smartphone and be on social media though the digital age of consent has recently been set at 16.

The age of digital consent is the age at which a child can give their consent to a platform or online service to collect and profile their information.

“Our data highlights the need to start education programmes with both parents and children from a young age with a focus on children embracing a more positive use of technology,” said Mr Cooney.

He called on the State to appoint a digital safety commissioner to deal with social media companies who he said should be doing more to protect under-age users.