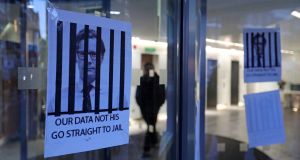 The EU is seeking the power to impose significant fines on European political parties that misuse voters’ personal data to influence elections, as Brussels moves to crack down on privacy breaches following the Facebook-Cambridge Analytica scandal.

The European Commission is drafting an amendment to existing party funding rules that would ban political groups from profiting from data collection of the sort alleged against Cambridge Analytica. The UK-based company that worked with Donald Trump’s presidential campaign is accused of improperly mining the data of millions of Facebook users.

Although the plans are still being finalised, the sanctions are likely to amount to about 5 per cent of the annual budget of a political party. “It is meant to ensure that something like Cambridge Analytica can never happen in the EU,” said one official.

The proposed legislative change will be the first time EU regulators have set their sights on the data collection activities of political parties. The fines will apply to European political families that combine national groups under EU-wide banners such as the centre-right European People’s Party, centre-left Socialists, or Eurosceptic European Conservatives and Reformists Group. The commission does not have the power to directly fine domestic parties.

The draft amendment will need the approval of EU governments and the European Parliament to come into force.

The proposal comes ahead of the European Parliament elections in May 2019, which Brussels officials fear will be the target of malign disinformation campaigns and sophisticated online voter targeting from Eurosceptic forces.

New penalties for political parties would be the toughest element of a broader package of measures to be unveiled next month aimed at countering online voter manipulation and personal data misuse for political purposes. Brussels will also issue recommendations to governments to clamp down on the practice of groups sending personalised political messaging to social media users without their consent – so-called “micro-targeting”. The EU will also demand that member states impose stricter transparency requirements on online political advertising in their national laws.

“We have to come closer to how political campaigning works in the offline world for the online world,” EU justice commissioner Vera Jourova said last month. “Voters and citizens should always understand – when something is an online campaign – who runs the campaign, who pays for it and what they want to achieve.”

Although online voter targeting is not illegal, the EU wants political parties to ensure personal information collected from third parties such as data brokers has been obtained legally with the explicit consent of users.

Ms Jourova has said that the EU would not go as far as regulating online activity of any political group. “The internet is a zone for free expression. Everybody can be a journalist or an influencer, and these are the things that we don’t want to touch,” she said.

The sanctions for pan-EU political parties would be on top of fines that EU governments can impose on organisations including domestic political parties that handle European citizens’ personal data under the General Data Protection Regulation. Fines under GDPR, regarded as the world’s toughest privacy framework, can amount to 4 per cent of a company’s global turnover or €20 million, whichever is greater.

The commission is also drawing up plans to force social media groups such as Facebook, YouTube and Twitter to identify and delete online terrorist propaganda and extremist violence within an hour of detection or face the threat of fines.