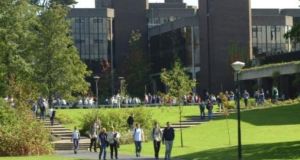 University of Limerick’s campus consists of more than 300 acres of buildings and facilities.

The University of Limerick (UL) is planning to erect special cameras to monitor the 5,000 vehicles that enter and leave the campus every day, including specific cars it would place on a security “watch list”.

The proposal may raise concerns about the privacy of more than 11,000 students, 1,300 staff, and visitors to the 133-hectare site.

A tender request for the automated number plate recognition cameras was posted on the Government’s eTenders website and closed in July but has not yet been awarded.

The university has two main entrances – the Western Entrance and the East Gate – and about 5,000 cars, HGVs and buses enter and leave the campus every day.

The tender documents say the camera system shall be capable of recording vehicle registration plates as they enter and leave and that it be able to provide “clear information” on vehicles in day and night-time conditions. “Colour overview” cameras will also record the vehicle associated with the number plate recorded.

The tender also specifies a large hard drive, which would be capable of storing hundreds of hours of footage.

According to the tender documents, the system should be capable of reading number plates from different countries and regions. It should also be capable of providing a “full history” of a licence plate’s entry and exit of the campus.

The tender also specifies that the system should generate an “event” when it detects “pre-listed” vehicle registration numbers “that will trigger an alarm in security control room monitor and send alert messages to security mobile phones reporting presence of vehicle on campus and entry point”.

Newcastle West-based solicitor Rossa McMahon, who has recently raised concerns about a large public CCTV scheme in Limerick, said it was “difficult to see what valid security reasons exist for putting all vehicle traffic under constant surveillance in this fashion”.

With regard to the requirement that the system be able to handle a “pre-listed” set of registrations, Mr McMahon added: “The university has to explain what this list is, who will be on it and why,” he said.

“It is disappointing to see UL follow the lead of other organisations by adopting enhanced surveillance technologies.”

Mr McMahon said the tender raised “many privacy concerns”, the first being whether the university had carried out a data protection impact assessment before tendering.

“This assessment should cover planned retention periods, use of the records, and the nature and source of the information that will be on the pre-listed plate numbers that will trigger alarms,” he said.

“The campus is not ordinary private property and consists of over 300 acres of buildings and facilities. It includes five accommodation villages, vast sports facilities used by many external clubs and organisations, and extensive grounds used by local residents and communities. It is difficult to see what valid security reasons exist for putting all vehicle traffic under constant surveillance in this fashion.”

Asked whether the tender had yet been awarded and for details of the data protection impact assessment conducted, a spokesman for the University of Limerick said: “The current status of this tender is at the evaluation stage and the contract will not be awarded until this stage has concluded, which will result in all tenderers being notified who the contract has been awarded to.”

Asked about the “watch list”, the university spokesman did not clarify the purpose of it or how it would be compiled.

He said the campus had a “full-scale traffic management” challenge because of its size and there was nothing comparable to it among third-level institutions in the State.