TDs may be required to use fingerprint for voting and expenses 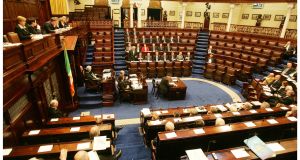 TDs must have a minimum of 120 days’ attendance over the year to qualify for the travel and accommodation allowance. File photograph: Alan Betson

TDs could be required to use fingerprint technology to vote in the Dáil and clock in for the purposes of claiming expenses under moves being considered by the Oireachtas.

Reform of the voting system and how TDs clock in around the Houses of the Oireachtas is expected to be on the agenda for a meeting next week of the body that runs Leinster House.

It is understood the Houses of the Oireachtas Commission will consider asking clerk of the Dáil Peter Finnegan to address concerns over Dáil voting and the “fob in” expenses system.

Sources said the changes could be in effect around the Oireachtas campus by the time the Dáil and Seanad return after the Christmas recess. The campus comprises several buildings in the vicinity of Kildare Street, including Leinster House.

Ceann Comhairle Seán Ó Fearghaíl is said by sources to be determined to restore faith in the Oireachtas and is in favour of tightening up the voting and expenses systems.

It is understood that potential technological changes have already been examined, with fingerprinting one of the options.

“You could use a fingerprint system if you want,” said a senior source. “It has been investigated and it is feasible.”

The Dáil voting system has been at the centre of recent controversy, with numerous TDs admitting to pressing the voting button for colleagues who may not be in their designated seats to cast their votes.

An electronic “fob in” system operates for TDs to claim expenses under the travel and accommodation allowance scheme, which is calculated on how far a TD lives from Leinster House.

There are 25 machines around the Oireachtas campus where TDs can electronically “fob in”. They must have a minimum of 120 days’ attendance over the year to qualify for the allowance.

At present, TDs use small key-ring like devices to fob in but the Oireachtas is considering changing this to a fingerprint system also.

While the Houses of the Oireachtas Commission enforces the rules, it does not set them. The current regime was set down by former minister for finance Brian Lenihan in 2010.

The exact time an individual TD or Senator fobs in is not recorded, only the date is. It is not open to the Houses of the Oireachtas to change this particular aspect of the rules, although it could be changed by Minister for Finance Paschal Donohoe.

A statutory instrument set down by Mr Lenihan in 2010 noted that the allowance must be “verified by attendance”.

“The Oireachtas commission may make such arrangements as are necessary to enable members to record their attendance at Leinster House, including through electronic means,” it states.

Rise TD Paul Murphy asked Mr Ó Fearghaíl to investigate the system and asked: “Is it the case that TDs are getting other people to fob in for themselves at these systems in order to get up to the 120 days?”