Gay Byrne: In his own words 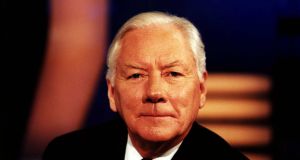 Gay Byrne: ‘I think about death like everybody else thinks about, anybody who thinks that they’re going to be remembered.’ Photograph: RTÉ

On persuading then northern secretary Peter Brooke to sing Oh My Darling Clementine on the same day as seven men died violently in Cookstown
“That was a straightforward honest mistake . . . What I cannot understand is that he [Peter Brooke] knew about that explosion . . . and I cannot understand why the man did not there and then say to me ‘I’ll sing it for you some time, but tonight is not the night for singing’. It was poor political judgment on his part insofar as the impression given by the anti-Byrne falange was that Gay Byrne, this awful ogre . . . forced him to do something: on The Late Late Show which he had no intention of doing.” – Kathy Sheridan interview September 17th, 1994

At the end of a Late Late Show interview with Annie Murphy, who talked about her relationship with Bishop Eamonn Casey, and their son Peter
“I hope his son will be half the man his father was.”

After the controversy that followed the comment
“Yes, well that was unfortunate and may have been misinterpreted. What I was thinking of quite frankly and with my hand on my heart was that she started the interview by telling me what she loved about Eamonn Casey, which was his ebullience, his extrovert nature his generosity, his expansiveness, his way with people and so on and that was in my mind at the end of the interview about the young fellow.”

On Annie Murphy herself
“With my hand on my heart, I say I absolutely loved Annie Murphy and have great respect for her.” – Kathy Sheridan interview September 17th, 1994

On Stephen Fry, after his controversial comments on The Meaning of Life on what he would say to God if they met
“I liked him [Stephen Fry] enormously, I’ve been a fan of his for a long, long time, and secondly he’s a much bigger fella than you’d think he is, a big, bulky guy, and he has this sonorous, beautiful voice, and wonderful delivery, and what he had to say he said with passion, and conviction, and total belief, and he couldn’t wait to get it out, because he was so angry about the whole thing.” – In interview with Róisín Ingle for her Irish Times Róisín Meets podcast, February 2015

On the controversy over inviting two lesbian nuns to talk on The Late Late Show
“The lesbian nuns turned out to be two delightful women, who were speaking about the occasion of special friendships within convent walls, and they were delightful and wonderful, and needless to say I kept them to the very last item of the show. We got one of the biggest TAM ratings of all time, and when it was all over and these two delightful women said goodnight, everybody said, ‘Is that what all the fuss was about?’ We were in this situation of saying then ‘Well you made all the fuss, don’t look at us’. And that was it.” – In interview with Róisín Ingle for her Irish Times Róisín Meets podcast, February 2015

His advice for young would-be presenters
“Whenever I am asked now as a very, very old man, and decrepit as you can see the pitiable sight you see before you now, whenever I’m asked by young people for a word of advice I’d tell them to start now in school taking part in debates or drama or music or any thing which will get you on a podium and you’re looking down at an audience of people and you have to speak.” – In interview with Róisín Ingle for her Irish Times Róisín Meets podcast, February 2015

On Ireland’s role in the EU
“I feel like the disaster was us joining the euro. I think that was the demarcation point. And now we are not in control of our own destiny. It is too late. This is just an 80-year-old rant, you understand, and there’s nothing we can do about it. We are mired in this mud and this quagmire. But I feel very sorry not even for my children but for my grandchildren, because I do sincerely believe we are headed for a totalitarian state of Europe, and nothing will stop them.”

On the secrets of his success
“I’m a list man and I believe that somebody paid me the greatest compliment in his book one time by telling me that I’m very efficient and I’m efficient because I make lists.” – In interview with Róisín Ingle for her Irish Times Róisín Meets podcast, February 2015

On criticism of his show
“There were special county council meetings called together to discuss The Late Late Show and Gay Byrne. And to bring a motion for his dismissal, if not his beheading and getting the Late Show off the air and people took it very, very seriously. It’s impossible to describe to young people now the significance which people attached to everything that happened on television for the first, probably the first 10 years of RTÉ.” – In interview with Róisín Ingle for her Irish Times Róisín Meets podcast, February 2015

On personal criticisms
“I have been described at one end of the spectrum by a TD in Dáil Éireann at one stage who said that he had absolute proof that I was a communist and I was being paid directly from Moscow. He had absolute proof. He never delivered the proof but that’s what he said in Dáil Éireann. And the other end of the spectrum, I’ve been described as a dull, boring, conservative priggish, priggish was the word, priggish Irish Catholic, so you can take your pick in between. And the truth of course is, as I think I said to you already, the truth is that in the middle, I’m just shallow and worthless and they never tumble to this or [not] many of them do.” – In interview with Róisín Ingle for her Irish Times Róisín Meets podcast, February 2015

On feminist Ireland
“I went through a programme after programme about feminist Ireland with the people like June Levine, Margaret Guy, Nuala Fennell and . . . Mary Kenny with the cleavage down to here, and the skirt up and outraging the women of Ireland, not doing badly for the men of Ireland I must say.” – In interview with Róisín Ingle for her Irish Times Róisín Meets podcast, February 2015

On spirituality
“Yes, I am (spiritual) like everybody else, I’m looking for certainty. I’m looking for something to hang on to. And I’ve been brainwashed with all the other lovely Catholic people in Ireland by the Christian Brothers. You don’t come through 10 years of the Christian Brothers in Synge Street, or indeed the Christian Brothers anywhere, with half an hour of every day being devoted to Catholic theology and Catholic apologetics and so on, without that making an impression on you, and it requires a very, very, very strong will to say ‘I am finished with all of that. And I am casting it aside and having nothing further to do with it’. I haven’t got to that stage yet.” – In interview with Róisín Ingle for her Irish Times Róisín Meets podcast, February 2015

On death
“I think about it [death] like everybody else thinks about, anybody who thinks that they’re going to be remembered. You will be remembered by your spouse if that is the situation which presents itself, you will be remembered by your children . . . the grandchildren now are old enough to have a memory so they would probably remember me for a short time. Generally speaking, after a fortnight, you’re forgotten. I’ll give it two weeks.” – In interview with Róisín Ingle for Irish Times Róisín Meets podcast, February 2015