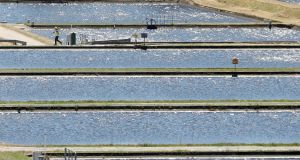 The rate that water leaks from Irish Water’s network is “unacceptable” by any measure, according to the first report from the State’s Water Advisory Body.

The body which was set up last year to oversee the work of Irish Water also found the utility is facing significant cost overruns and not working fast enough to replace aged water mains.

It was also not fixing deficient waste water treatment facilities in an efficient or timely manner, the report found.

Total forecast spend across the five projects is now €2,364 million, compared with €2,070 million under the 2016 Investment Plan.

The report from the Water Advisory Body said compliance with the microbiological standards in drinking water is high.

It also found that Irish Water had an action plan in place to fix water supplies which were listed on the Remedial Action List.

The report also noted the reducing numbers of consumers on “boil water” notices, and increasing levels of customer satisfaction coupled with increasing perception that the utility was easy to contact.

The first of the body’s reports, which are to be published quarterly, also found there had been a significant drop off in the number of leak repairs completed under First Fix Scheme from mid-2016.

Under the first fix scheme, Irish Water undertakes to carry out and pay for the first fix in pipe work on a homeowner’s property, which is the legal responsibility of the homeowner.

The report also accepted the Environmental Protection Agency’s view that Ireland is not addressing the deficiencies in its waste water treatment infrastructure at a fast enough pace.

While the water body noted the forecast costs of five major schemes, it said detailed examination of these projects was a matter for the regulator, the Commission for Regulation of Utilities.