‘He shone a light on Irish life’: Higgins pays tribute to Gay Byrne 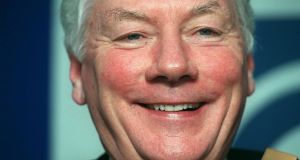 Gay Byrne has died at the age of 85, following a long illness

President Michael D Higgins has led tributes to the late broadcaster Gay Byrne, remarking upon his sense of justice, as well as his ability to challenge Irish society and shine a light on the dark sides of Irish life.

The death of Byrne, following a long illness, was announced by RTÉ on Monday. He was 85 years old.

“A man of great charisma, Gay Byrne was someone who exuded warmth and presence, who was possessed of effortless wit, charm and who had a flair for broadcasting,” said Mr Higgins.

“This was combined with an innate gentleness as a person, professionalism and humour.

“Through his work in radio and on television he challenged Irish society, and shone a light not only on the bright but also the dark sides of Irish life.

“In doing so, he became one of the most familiar and distinctive voices of our times, helping shape our conscience, our self-image, and our idea of who we might be. Beyond compassion, which he had in abundance, he had a sense of what was just.”

Taoiseach Leo Varadkar described Byrne as “the most influential broadcaster in the history of the State”, as well as “a much-loved figure who changed Ireland for the better in so many ways”.

“On radio and on television over so many decades ‘Uncle Gaybo’ provided a voice for all those who had been silenced or were afraid to speak up, and helped us confront things that needed to be changed.”

Mr Varadkar said Byrne’s story of his “ remarkable contribution to Irish life is the story of how we changed and evolved as a society over the past 60 years”.

“A consummate entertainer, he also provided a voice for all those who had been silenced or were afraid to speak up, and he forced us to confront things that needed to be challenged in our society.”

RTÉ director-general Dee Forbes said everyone at the broadcaster was “greatly saddened” by the death of Byrne.

So sad to hear about Gay’s passing. His journalistic legacy is as colossal as the man himself – Ireland grew up under Gay Byrne, and we will never see his like again. My deepest sympathies to Kathleen and the family." #GayByrne

On radio and on television over so many decades ‘Uncle Gaybo’ provided a voice for all those who had been silenced or were afraid to speak up, and helped us confront things that needed to be changed. Ar dheis Dé go raibh a anam dílis.

So saddened to hear of the passing of Gay Byrne -a broadcasting legend who did so much to lift our spirits,shape our society for the better and bring warmth into so many homes over the years. Sympathies to Kathleen,Suzy and Crona.May he rest in peace.

“Gay was an exceptional broadcaster whose unique and ground-breaking style contributed so much to the development of radio and television in this country,” she said.

“Gay’s journalistic legacy is as colossal as the man himself – he not only defined generations, but he deftly arbitrated the growth and development of a nation. Ireland grew up under Gay Byrne, and we will never see his like again.”

Master of his trade

“It is with enormous and profound sadness that I heard of the passing of my friend and mentor, Gay Byrne,” he said. “He was the master, a once off and the likes of which we will never see again.

“I watched him as a child, worked alongside him as a young man and he guided me as I grew older and I will forever be indebted to him. We in RTÉ have lost a friend, a family have lost a father and a husband, and the country has lost an icon.”

Broadcaster Joe Duffy paid tribute to the influence Byrne had on Irish life: “More so than any one individual, Gay Byrne represented modern Ireland and through his daily broadcasting on radio and television he propelled this country and its people forward.”

Séamus Dooley, Irish Secretary of the National Union of Journalists, said Byrne was “the father of public-service broadcasting in Ireland”.

“A broadcaster of courage, vision and boundless energy Gay Byrne helped shape modern Ireland and used his talents to help create a more caring, compassionate and inclusive society,” he said.

“He was often infuriating, annoying and provocative but Gay was never dull and in his career he brought light, laughter and humanity to television and radio debates.”

Fianna Fáil leader Micheál Martin acknowledged Byrne’s role as chairman of the Road Safety Authority as well as the part he played as a broadcaster.

“Gay Byrne has left an indelible mark, not only on Irish broadcasting, but on Irish society as a whole,” he said.

“His intellect and emotional intelligence was unparalleled and his ability to sensitively approach delicate and sometimes controversial issues set him apart from other presenters.

“Gay was a true public servant and accepted the chairmanship of the Road Safety Authority in 2006.

“This decision gave the organisation a huge boost and Gay became the face and voice of many campaigns, which no doubt saved the lives of pedestrians, motorcyclists and drivers across the country.”

The Lord Mayor of Dublin Paul Mc Auliffe will open a book of condolence for Byrne, who received the honorary freedom of Dublin city in 1999.

The book will be open for members of the public to sign at the Mansion House on Dawson Street in Dublin city centre from 11am on Tuesday, November 5th, until 5pm, and again on Wednesday, November 6th from 11am-5pm.

The flag at the Mansion House will be flown at half mast.

Mr Mc Auliffe said: “I am opening a book of condolence to allow the people of Dublin to express their sympathies to the family of Gay Byrne.

“Gay had a huge impact on Irish society and was more than just a broadcaster. During his time as the host of the Late Late Show, he offered a platform for many varied and controversial issues and changed the social dialogue of the country.”