Up to 50,000 will be affected by next nurses’ strike on Thursday, and the Psychiatric Nurses Association is due to extend its overtime ban 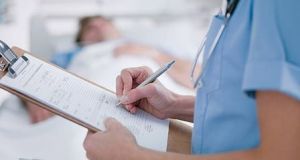 The Irish Nurses and Midwives Organisation insists the Government has to address nurses’ salaries to resolve the dispute. Photograph: Getty Images

There is no guarantee that giving a pay rise of 8 per cent, or even up to 12 per cent, to nurses would solve the problem of recruitment and retention in the health service, Taoiseach Leo Varadkar has said.

He told the Dáil on Tuesday that nurses in Australia and the United Arab Emirates were paid more than in Ireland, but that the additional remuneration had not solved the problem of recruiting and retaining staff in those countries.

As nurses went on strike for a second day as part of a dispute over pay and staffing issues, the Taoiseach said nurses were paid more in Ireland than in the North, Scotland, Wales and most of the UK except London.

“We pay more than most of Europe. All of those places have recruitment and retention challenges.”

Mr Varadkar said Ireland had a turnover rate of 5 per cent among nurses, which was one third of that in Australia.

Meanwhile, the Irish Nurses and Midwives Organisation (INMO) has insisted that the Government has to address nurses’ salaries to resolve the dispute.

Speaking at St James’s Hospital in Dublin, the head of the INMO, Phil Ní Sheaghdha, said nurses on the picket lines believed that any settlement would have to involve a review of pay scales.

“The reason nurses are leaving [the country] is that they are being offered better pay abroad. We are in a competitive market. If the Government insists the only remedy cannot involve pay, then we have a huge problem.”

In the Dáil the Taoiseach was strongly criticised by Fianna Fáil leader Micheál Martin for the call on nursing unions by Minister for Health Simon Harris and Minister for Public Expenditure Paschal Donohoe in a press release issued on Monday to engage in talks on issues excluding pay.

The INMO rejected that initiative, and described it as “cynical”, claiming it had only heard about the proposal in the media .

The Fianna Fáil leader said the Government had made the situation worse, and asked the Taoiseach if he had “reprimanded your Ministers”.

Mr Varadkar said that “tens of thousands of people” found out through the media that their appointments, their respite care, had been cancelled.

However, he acknowledged that no direct contact had been made with nurses when they were invited to attend talks by the two Ministers at the Workplace Relations Commission (WRC).

The Taoiseach said he would make sure it would not happen again, and he insisted that the invitation to talks at the WRC had been sincere.

Meanwhile, a further 50,000 patients face having appointments for hospitals and community services scheduled for Thursday cancelled as a result of the next strike planned by nurses.

The strike on Tuesday and the forthcoming stoppage on Thursday will see nearly twice as many people affected than was the case last Wednesday when nurses first took to the picket lines as part of the current dispute.

This week other services such as respite and other community facilities have been brought within the scope of the action.

The HSE’s interim national director of community operations, David Walsh, said on Tuesday no admissions for respite care had been made this week due to the nurses’ strike.

Health service managers are also concerned at the potential impact of an escalating overtime ban being implemented by members of the Psychiatric Nurses Association (PNA).

About 120 people had day services in mental health facilities cancelled on Tuesday as a result of the overtime ban which forced management to redeploy nurses to acute services and to 24-hour hostels where patients are accommodated.

On Wednesday and Thursday the PNA is due to extend the overtime ban, which has applied up to now during the daytime only, to a full 24 hours.

Separately, on Wednesday some GP services may face disruption as family doctors stage a rally outside Leinster House seeking a reversal of cuts and greater State investment in general practice.

Dublin shoppers urged to cycle or walk, to allow essential workers to commute 13:54
Bus and rail services to return to pre-Covid levels from Monday 12:58
Sports bodies must keep electronic records of participants as training sessions resume 12:08
Penneys announces it will reopen Irish stores next week 11:55
Pipe bomb explodes in car in Co Antrim 11:54