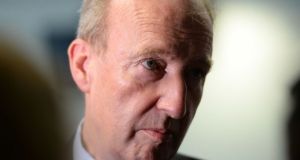 Minister for Transport Shane Ross: he will say EU no-deal plans will ensure continued air access between the EU27 member states and the UK for a limited period of 12 months. Photograph: Alan Betson

The “very real fears” that aircraft might not be able to fly to and from the UK if there is a no-deal Brexit are being addressed, Minister for Transport Shane Ross will pledge on Wednesday.

Mr Ross is due to appear before the Oireachtas Committee on Transport, where he will discuss Brexit contingency plans and an omnibus Bill designed to prevent travel chaos if the UK crashes out of the EU without a deal.

He will outline the key challenges for his department, including continued aviation connectivity, the potential impacts on ports and airports, as well as the impact on the UK “landbridge” – the journey across Britain taken by Irish hauliers on their way to the continent .

In relation to aviation, Mr Ross will outline how “while not everything that the industry would wish for will be possible, the very real fears that aircraft might not be able to fly are being addressed”.

He will outline how some 44 per cent of all flights to or from Ireland, approximately 113,000 flights per annum, are to or from the UK.

Mr Ross will say EU no-deal plans will ensure continued air access between the EU27 member states and the UK for a limited period of 12 months.

He will also outline how community air carriers may need more time to restructure their companies if there is a no-deal Brexit.Mr Ross will also discuss concerns around the landbridge, and legislation to ensure trains and buses can continue to travel cross-Border.

Fake news and ‘astroturfing’: What to look out for on social media during Election 2020

Fake news and ‘astroturfing’: What to look out for on social media during Election 2020