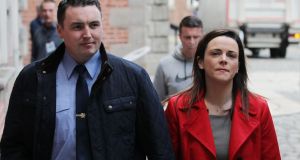 Garda Keith Harrison, who gave evidence before the Disclosures Tribunal, has secured a High Court order halting an internal Garda investigation into alleged breaches of discipline by him.

In proceedings against the Garda Commissioner, the Co Donegal based Garda, who denies the alleged misconduct, claimed the investigation was brought following certain adverse comments made about him in an interim report by the tribunal chairman, Mr Justice Peter Charleton.

His lawyers argued the tribunal’s comments cannot have any legal implications, cannot be relied upon by the Garda Commissioner to discipline Garda Harrison and the investigation should be prohibited.

On Tuesday, Mark Harty SC, for Garda Harrison, told Mr Justice Seamus Noonan, following talks between the sides, an order could be made on consent quashing the decision to appoint an officer to investigate alleged breaches of discipline by Garda Harrison.

Counsel also said it was agreed an order for costs could be made in Garda Harrison’s favour.

The judge made those orders and struck out the proceedings.

Last year, the Disclosures Tribunal rejected allegations made by Garda Harrison and his partner Marissa Simms, including that Ms Simms was compelled by gardaí­ to make a statement against him which led to a Tusla referral.

Garda Harrison also alleged he was a victim of a five-year intimidation campaign after arresting a fellow officer for drink-driving in Athlone in 2009.

In an interim report, Mr Justice Charleton said all of the allegations by Garda Harrison and Marisa Simms which were examined by the tribunal were “entirely without any validity.”

The judge added he was exonerating persons with Tusla and An Garda Síochána who had been accused of wrongdoing. Last July, Garda Harrison was informed a Garda superintendent had been appointed to conduct an internal investigation into alleged breaches of discipline by him. That decision resulted in his legal proceedings.