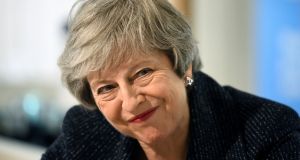 British prime minister Theresa May at a community centre during her visit to Belfast on Tuesday. Photograph: Clodagh Kilcoyne/PA Wire.

Theresa May’s speech in Belfast on Tuesday will not have reassured those in Northern Ireland who are angry over last week’s apparent abandonment of the withdrawal agreement she negotiated with the European Union. But it marked an important shift in Britain’s official position on the backstop as she prepares to meet Jean-Claude Juncker and Donald Tusk in Brussels on Thursday.

The amendment tabled by Conservative backbencher Graham Brady and backed by a majority of MPs last week called for “the Northern Ireland backstop to be replaced with alternative arrangements to avoid a hard border”. But the prime minister said in Belfast that “it would mean replacing the backstop with another arrangement which avoids a hard border or making legally binding changes to the backstop to introduce a time limit or create an exit mechanism”.

Answering questions after her speech, May said she remained committed to an “insurance policy” to prevent a hard border and there was no question of a Brexit deal that did not include it.

“I’m not proposing to persuade people to accept a deal that does not contain that insurance policy for the future. What parliament has said is that they believe there should be changes made to the backstop,” she said.

Ministers and officials continue to meet the Conservative MPs behind the so-called Malthouse Compromise, which envisages replacing the backstop with a tariff-free trade area and technological and administrative measures to reduce customs friction. But the prime minister has now made clear she believes the House of Commons could approve her Brexit deal if the backstop is changed rather than replaced with “alternative arrangements”.

Brussels and Dublin have ruled out reopening the text of the withdrawal agreement and have rejected proposals to include a time limit or a unilateral exit mechanism in the backstop. These proposals are unacceptable to the EU but they are negotiable, unlike the Malthouse ideas which are viewed on the European side as frankly ridiculous.

DUP leader Arlene Foster on Tuesday signalled a willingness to be flexible, telling the BBC she would not insist the backstop should be removed from the withdrawal agreement.

“I think it’s for the prime minister to negotiate in relation to these matters,” she said.

Some of May’s own Brexiteer backbenchers will be less understanding if she appears to drop the Malthouse proposals and Downing Street insisted on Tuesday ministers were pursuing all three options - a time limit, an exit mechanism and “alternative arrangements” - with urgency.

The prime minister cannot expect much comfort or encouragement from Juncker and Tusk, who will repeat that the withdrawal agreement is not up for renegotiation. But in stating that legally binding changes to the backstop would be enough to win a majority at Westminster she has moved her negotiating position back into the realm of the possible.