Strike affecting 50,000 a day as HSE indicates not all cancer operations were exempted from stoppage 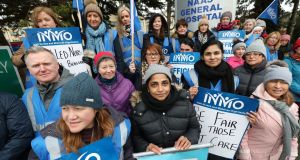 In an address to be given to the Oireachtas Health Committee on Wednesday the new interim head of the HSE, Anne O’Connor, will warn that with each day of strike action by nurses there is an increased risk for patients along with the rising levels of disruption.

On Tuesday the HSE indicated that not all cancer operations had been exempted from the stoppage and that only urgent surgery had been carried out.

The HSE also has concerns about mental health services, particularly day services in the community, as a result of an escalating overtime ban being put in place by psychiatric nurses.

The strike by nurses over pay and staffing affected about 50,000 patients on Tuesday.

Patients scheduled to undergo procedures or attend hospital outpatient or community services on Thursday are now being advised these are likely also to be cancelled. This will also affect about 50,000 people.

However, health service managers are very concerned about what will happen next week when members of the Irish Nurses and Midwives Organisation (INMO) and the Psychiatric Nurses Association (PNA) are scheduled to stage three 24-hour work stoppages.

Health service chiefs are worried both about what will happen on each of the days of the strikes but also at the cumulative effect.

About 13,000 people a day are affected as a result of the cancellation of hospital outpatient appointments, for example.

And while backlog from one day could be managed by putting in place “catch-up” clinics across the country, it would be much more difficult to deal with 50,000 people needing to be accommodated with new outpatient dates.

Already going into the nursing dispute there were more than 500,000 people waiting for outpatient appointments.

One of the plans of Minister for Health Simon Harris for this year was to put in place a new initiative to drive down these numbers, potentially by using the national treatment purchase fund.

The fallout from the nurses’ strike will make that ambition much more difficult to achieve.

Government sources said on Tuesday that the escalating dispute had led to a new focus on getting public service management and unions back around the negotiating table.

The Government is insisting that it cannot offer any further pay increases to nurses on top of those set out in the public service agreement.

However, sources said there had been a “big push” over recent days within relevant Government departments to see if anything could be done within the scope of the accord.

It is understood the view of the Department of Public Expenditure remains that there can be no additional increases in 2019 or 2020 while the current agreement remains in force.

The same department has argued that if nurses were to secure an additional 12 per cent as a result of the strike, this would mean that, overall, some nurses would see their pay rising by between 22 per cent and 40 per cent over the two years, 2019 and 2020.

These figures include payments under the public service deal as well as increments and additional money which nurses appointed since 2011 would receive under the Government’s initiative to tackle the two-tier pay arrangements for recent entrants.

The INMO argues that pay increases under the public service agreement represent a restoration of pay that had been cut previously.