The Coombe begins abortion services for women in catchment area

Referrals only being accepted from Kildare, west Wicklow and parts of Dublin 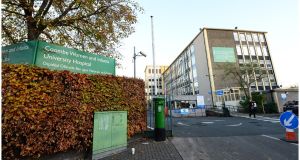 The Coombe Hospital in Dublin is one of nine of the State’s 19 maternity hospitals to offer abortion services so far. Photograph: Bryan O’Brien

The Coombe Women and Infant’s University Hospital has begun offering abortion services, but only for women in its catchment area.

The Coombe is the last of the three big Dublin maternity hospitals to begin providing the service since the law on abortion was liberalised at the start of January.

It had previously told the Government it would not be ready to provide the service in time for the January 1st deadline set by Minister for Health Simon Harris. Among the reasons it gave was the absence of finalised clinical guidelines and models of care, as well as staff training issues and resources.

A spokesman for the hospital said on Tuesday that it was now accepting referrals for abortion services under the new legislation. Referrals are being accepted from women living in the hospital’s catchment area of Kildare/west Wicklow, and west, south-city and south-west Dublin.

“GPs or a community-based service, such as the Irish Family Planning Association and Well Woman Centres, will be able to refer you to the hospital via the usual referral pathways. The Coombe is not accepting self-referrals at this time.”

In effect, this means the hospital will accept referrals from the HSE’s MyOptions helpline or a patient’s GP, where the GP has opted in to the new service.

The hospital’s decision to restrict services to women living in its catchment area follows the precedent set by the National Maternity Hospital and the Rotunda Hospital. However, the HSE has said hospitals should not restrict intake in this fashion.

Some 253 GPs have signed up to provide medical abortions, according to the HSE. However, only 126 of these are taking referrals from the MyOptions helpline.

Under the service, GPs can provide medical abortions up to nine weeks, and can refer women seeking termination to a maternity unit between nine and 12 weeks gestation. Nine of the State’s 19 maternity units are operating the service.

The Coombe was the focus of controversy last month when two Opposition TDs raised the case of a woman whose baby had a foetal anomaly and was refused an abortion. Doctors made the decision after determining the anomaly was non-fatal.