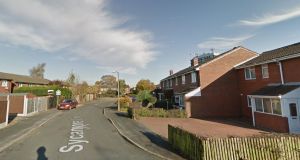 Four young children were killed when a fire ripped through their family home in the English West Midlands early on Tuesday.

Riley Holt (8), Keegan Unitt (6) and his siblings Tilly Rose (4) and Olly (3), died in the blaze on Sycamore Lane in the Highfields area of Stafford.

A fifth child, named locally as Jack (2), escaped through a first-floor window along with his mother Natalie Unitt and her partner Chris. They remain in hospital with non-life-threatening injuries.

A local resident described how a sheet of flames engulfed an upstairs window at the semi-detached property, at about 2.40am on Tuesday.

The witness, who asked not to be named, said: “We heard a bang and looked out of the back window upstairs. At the start it was just a sheet of fire coming out of the bedroom window. It seemed to take ages for the fire brigade to arrive – it seemed like forever.

“The neighbours came out and drove their car out of the back garden and there were lots of fire engines and police.”

A Staffordshire Police spokesman confirmed the deaths of the four children.

Teachers described the children as “bright, happy, loving and lively”.

Fire crews remained at the scene on Tuesday combing for clues as to what caused the fire. Part of the roof of the house had collapsed, with the windows smashed and the inside appearing to have been blackened by smoke.

Speaking at the scene, Rob Barber, deputy chief fire officer for Staffordshire fire and rescue service, said: “One male, one female and a baby had escaped from the property prior to our arrival via a first-floor window.

“Our firefighters were faced with very difficult conditions inside the property due to the severity of the fire. At this time I cannot comment further on the likely cause.”

Nicola Glover, head teacher at Castlechurch Primary School said: “Our entire school community is absolutely devastated by this news. Riley was a very confident, excitable member of school who came every day full of enthusiasm... Tilly was a happy little girl who loved coming to nursery. She was a friendly and caring child who loved to read stories, dress up and paint.”

“Olly was a happy, loving boy who loved cuddles. He was always happy to come to nursery and loved to be in the roleplay area with the dolls.”

Kim Ellis, head teacher at Marshlands Special School, where Keegan was a pupil, said: “Keegan was lively, full of fun and mischief with a really endearing smile. He loved school and everyone who worked with him loved him. We were all proud of him and the progress that he had made.

“It is very hard to accept what has happened.”

Both schools said support systems were being put in place to help staff and pupils. – PA