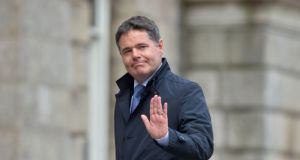 Minister for Finance Paschal Donohoe will complete the final details of the Budget on Monday evening. Photograph: Dara Mac Donaill

Recipients of the Pandemic Unemployment Payment (PUP) will receive the Christmas bonus this year provided they have been on the scheme for four months.

Following late discussions on Monday night between Minister for Public Expenditure Michael McGrath and Minister for Social Protection Heather Humphreys the Government will on Tuesday signal the move.

The total cost of the Christmas bonus this year is now expected to be in the region of €350million, far in excess of the €279million paid out last year.

Ordinarily qualification for the bonus is restricted to persons on long term welfare payments and those on the live register for 15 months or more.

Sources confirmed that in light of the unprecedented circumstances the Government is reducing the eligibility criteria to four months.

Applicants who had previously signed off PUP and subsequently had to go back on the payment can combine periods of payment to meet the requirement.

It has been estimated that 90 per cent of the current 228,000 PUP recipients will be eligible if they remain on the payment until early December when the Christmas bonus is paid.

As an exceptional once-off measure in 2020, those on jobseekers payments will also receive the bonus if they have been on the scheme for four months instead of the regular 15 months.

The criteria will revert to normal next year.

Working on my speech for tomorrow’s Budget. Looking forward along with @Paschald to giving a sense of hope to our country - backed up with very significant financial resources - that we will meet the huge challenges we face. We will get through this. pic.twitter.com/ceRjSjsesq

Ministers and officials spent Monday putting the finishing touches to Budget 2021, which will inject unprecedented resources into the economy in a bid to counteract the effects of the pandemic.

A huge surge in health spending of up to an extra €4 billion is expected, divided between short-term measures to tackle Covid-19 and longer-term measures including the expansion of bed numbers. Ministers are likely to announce over 1,000 new hospital beds, as well as new intensive care unit beds.

There will be provision for 300 new consultant doctors, to be offered a salary of €250,000 a year to work exclusively in the public system, it is expected.

There will also be extra recruitment elsewhere in the public service, with 400 new special needs teachers and 1,000 special needs assistants, it is expected. There will be an extra €100 million a year for spending on education for people with disabilities, bringing the special education budget to €2 billion for next year.

There is expected to be new money for Tusla, the Child and Family Agency, to fund domestic violence supports and provision for a number of unaccompanied child refugees to the brought to Ireland.

There is also likely to be a large package of grants and supports for businesses that are stricken by Covid, including those who have been forced to close, and those that are managing to stay open. It is expected that a new scheme involving weekly or monthly payments administered by Revenue will be announced in an effort to keep as many businesses as possible alive during the pandemic.

Employees and the self-employed are likely to be allowed earn perhaps up to €120 per week, while still qualifying for the pandemic unemployment payment (PUP), though these elements of the package have yet to be signed off, it is understood.

Sources also say that there is likely to be an extension of the commercial rates waiver.

While final decisions have yet to be made, the tourism and hospitality sector is likely to see VAT cut from 13.5 per cent to 9 per cent, though the higher VAT rate of 21 per cent will revert to 23 per cent as scheduled next year.

It is expected that there will be an extension of the scheme allowing businesses to postpone the payment of tax bills.

There will be significant announcements for housing and for environmental measures such as retrofitting, with some reports suggesting that a new national retrofitting project worth as much as €300 million could be unveiled. However, the €7.50 increase in the carbon tax is likely to go ahead, though this will be offset for elderly and vulnerable citizens.

There will also be a reform of the system of vehicle registration tax, which will incentivise motorists to switch to electric and hybrid vehicles, while penalising the purchase of larger petrol and diesel cars and SUVs.

There will also be other revenue-raising measures, including the regular increase – likely 50 cents – on a packet of 20 cigarettes. However, any increase in duty on alcohol is not expected. Tax bands will not be indexed, which will see some €300-€400 million raised as higher salaries push workers into the higher tax bands. A 1 per cent tax on betting discussed over the weekend is now thought unlikely to go ahead. There are unlikely to be changes to the rates of capital gains tax after the Green Party objected to proposed cuts, but there may be a change to the thresholds for capital acquisitions tax.

The Budget documents were due to be signed off on Monday evening, after which they will be printed and prepared for Tuesday. The Cabinet will be briefed on the full contents of the Budget by the two ministers at a special meeting at 8 am on Tuesday morning.