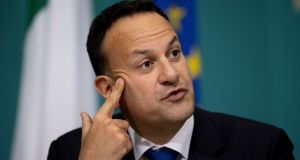 Tánaiste Leo Varadkar said even a limited free trade agreement would mean Irish products will still be on the shelves of British supermarkets. Photograph: Julien Behal

There is a “better than 50 per cent” chance of a limited free-trade agreement (FTA) between the United Kingdom and the European Union before the end of the year, Tánaiste Leo Varadkar has said.

Mr Varadkar said: “[It] mightn’t be the most ambitious one, but I think we’ll have what they call a thin or skinny agreement”.

Such an agreement, said Mr Varadkar who is also the Minister for Enterprise, Trade and Employment, would mean “no tariffs, no quotas”, common minimum standards and a dispute resolution system not involving the European Court of Justice.

A limited deal soon would bring “a sigh of relief” for Irish exporters, since a no tariffs/no quotas deal would keep Irish products “on the shelves of British supermarkets come January and February”.

The first tranche from the State’s €3.4 billion recovery fund is ready to cover Brexit costs facing agencies under his department’s remit. Some €100 million will be needed, even if a limited trade deal is done.

However, Mr Varadkar warned that without a free-trade agreement, his department would have to “dip into” the recovery fund announced in the budget, “and we’ll have to do it long before the first of January”.

“Without a FTA it’s very hard to be prepared, if you’re a beef farmer or a food exporter, and you’re going to face 40 per cent tariffs in 72 days’ time; how do you prepare for that? They’re going to need State aid at that point, and that State aid will be forthcoming,” said Mr Varadkar.

Meanwhile, he gave more detail about the Government’s Covid Restrictions Subsidy Scheme (CRSS), which will pay up to €5,000 a week to businesses forced to close by restrictions if turnover fell by 80 per cent, or more.

The scheme will be in addition to the Employment Wage Subsidy Scheme (EWSS) and aims to help businesses such as wet pubs, the entertainment industry and the tourism sector.

“We really wanted to do something for [them]. We were able to give people restart grants, but that wasn’t enough for those businesses that were effectively closed or de facto closed since March,” Mr Varadkar said.

It will come into play as Level 3 rules are enforced, costing around €40 million weekly if paid across all counties. It, too, will be funded by the Government’s €3.4 billion recovery fund.

The decision to cut VAT to 9 per cent will be hard to reverse in December 2021, he accepted: “Any temporary cut [and] you’re accused of increasing it when you try to unwind it.

“Whenever we try to withdraw it, it will be difficult to withdraw but it is a temporary measure; it’s not a permanent reduction,” the Tánaiste and Fine Gael leader said.

The local authority rates waiver will be extended until the end of the year, costing €300 million. The wage subsidy scheme will run through 2021, if required.

The Government has kept a €2 billion borrowed emergency fund in reserve. Borrowing is currently cheap, said Mr Varadkar, but “we know interest rates won’t be at zero forever”.