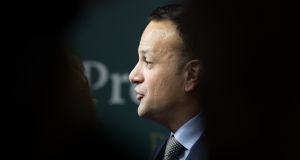 Leo Varadkar: the Taoiseach said parents and teachers all had a responsibility to educate children about appropriate behaviour. Photograph: Sean Curtin/True Media

Taoiseach Leo Varadkar has said an incident in which a “rape list” was scrawled in a boys’ toilets at a secondary school was “very worrying” and highlighted the need for better sex education.

Mr Varadkar said he had no doubt Davis College, in Mallow, Co Cork, would address the issue urgently and take whatever action was necessary, but parents and teachers all had a responsibility to educate children about appropriate behaviour.

“It does further emphasise the need to modernise and improve relationship and sex education in our schools. Minister [for Education Richard] Bruton announced we were going to do this anyway, but I think this really does emphasise that even more, especially in the age of social media and the prevalence of pornography.”

The Garda has confirmed it was made aware of the incident at the coeducational college, but so far nobody has formally complained about it, “so therefore, as of now, we are not carrying out any criminal investigation”, a spokeswoman said.

The principal of Davis College, Stephen Gilbert, said it was dealing with the matter internally.

The incident came to light when a parent of a student who was not on the list contacted The Neil Prendeville Show, on Cork’s Red FM, to say the names of four girls had been scrawled on the door of the toilets under the heading: “The ones with the most ticks is going to get raped”.

Mr Gilbert said the school was treating the matter extremely seriously and had removed the list as soon as staff learned of its existence.

Davis College also moved to clarify the situation after an anonymous schoolgirl, whose name was not on the list, told Prendeville on Friday that it was the third time such a list had appeared on the door of the boys’ toilet.

“The list yesterday morning was the first time it was brought to the attention of school management. School management has now been made aware there were two other lists, and a thorough investigation is under way to investigate who may have been the author(s) of the lists.”

The school also issued a statement on behalf of the four girls whose names appeared on the list, and who appealed for their privacy to be respected.

“We would like to stress our disappointment in the media coverage in bringing this incident into the public domain, without considering the impact this publicity would have on us as individuals,” said the girls, who have not been named in any mainstream media coverage of the story.

“When we reported the information to school management we were happy with how the situation was dealt with, as it was dealt with discretely and our privacy and dignity were kept intact. We greatly appreciate all the work and the support the school has given us.

“We are devastated that incorrect information has been given to the media. We are angered that people with no connection to the incident took it upon themselves to contact the media and speak about our situation. This has left us vulnerable and open to public opinion. We are devastated.”