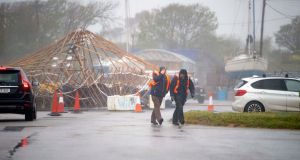 A festival tent in Fenit was blown down as storm Hannah hit Kerry. Photograph: Domnick Walsh

Power has been restored to over 31,000 homes affected by Storm Hannah as repair crews worked through what Met Éireann described as “very windy” conditions on Saturday.

The storm battered the south west of the country particularly hard on Friday night. Forecasters had issued several weather warnings, including a red warning of “violent gusts”.

The highest recorded gusts were at Mace Head in Galway, where 122km/h was observed, while gusts reached 119km/h at Shannon Airport.

The ESB said there were around 1,800 homes and businesses without power shortly after 5pm, with those affected predominately in counties Clare, Limerick, Kerry and Tipperary.

“ESB Networks crews have been continuing efforts to repair the electricity network since first light this morning,” a spokesman for the ESB said.

“At the height of the storm this morning, 33,000 customers were impacted.”

Crews would continue to work into the evening and the ESB expected the vast majority of remaining cohort to be back tonight, he added.

“All available resources from ESB Networks are deployed to carry out repairs to the network and restore power.”

Additional crews from less impacted areas of the country have been deployed in areas of west Munster that have seen most of the storm damage. These include county Clare, the Iveragh and Dingle peninsulas, north Kerry, west Limerick and parts of Tipperary.

The ESB said the damage to the electricity network is mainly attributable to trees falling on overhead lines as a result of the high winds.

Real time information on power outages and restoration times is available on the PowerCheck App or www.esbpowercheck.ie.

“Whilst the winds will abate, it will still be windy into the afternoon, with brisk northwest wind steering down a mix of sunny spells and scattered heavy showers,” the weather service tweeted.

The forecaster said much of the country will be dry by Saturday evening, with spells of sunshine. However, later in the night patchy outbreaks of light rain or drizzle will develop in the south and west, with temperatures dropping to between 3 and 6 degrees.

It will be generally cloudy on Sunday with scattered patches of light rain but there is expected to be a good deal of dry weather overall. Sunny intervals will develop, the best of these due in the south and west of the country in the afternoon. Highest temperatures will be between 12 and 17 degrees in moderate southwesterly breezes.

Monday is due to be mild with temperatures likely to fall again from Tuesday through to Friday.

“It’s already over northern England. There will be strong blustery north westerly winds that are going to continue to moderate during the day,” he said.

“It’s really an improving picture - rain in Ulster is going to clear out and then it’s going to be a bright day with some sunny spells and a few passing showers.”

Mr Martin said there is a “mixed outlook” for next week, with temperatures near average.

AA Roadwatch said roads were mainly damp or wet across the country on Saturday morning with wind-blown debris likely on secondary roads.

It has advised motorists to slow down and leave extra distance between vehicles in front and to be mindful of motorcyclists, cyclists and pedestrians.