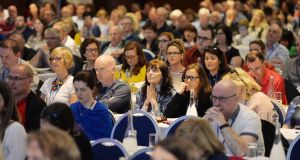 Second-level teachers are seeking the reversal of significant cuts made to their sick leave arrangements during the economic crisis.

However, the Department of Public Expenditure and Reform said on Thursday that sick leave reforms introduced in 2014 had generated cumulative savings of nearly €170 million and that it had no plans to make any changes.

Delegates at the annual conference of the Association of Secondary Teachers Ireland (ASTI) in Wexford unanimously passed a motion calling on the union’s leadership to negotiate with the Government on a return of teachers’ original sick leave arrangements.

Prior to the 2014 cuts, civil and public servants were generally entitled to six months of medically certified sick leave on full pay, with a further six months on half-pay.

However, teachers were entitled to a year on full pay, but no period on half-pay.

In cases of critical illness such as cancer, the original system of six-month periods on full and half-pay were retained.

Delegates at the conference also unanimously backed a motion demanding that the Department of Education should not count public holidays, weekends, school holidays or days when schools were closed as sick leave.

John Conneely said the current situation was unfair for a teacher who might be out of work for a long time, as teachers are scheduled to attend school for only 166 days.

This left 199 days off – and when those were included in sick leave, the teacher could easily reach the threshold for a reduction of their sick pay.

Suzy Hall described how she had been pushed into unpaid sick leave during the 1990s due to recurring cancer, and was applauded when she asked why the Government should profit from a teacher’s illness.

She maintained that those unpaid periods had consequences, as they were “whacked” off her pension and retirement lump sum.

The Department of Public Expenditure said it was not considering a return to pre-2014 paid sick leave limits.

It said it had reviewed the operation of the public service sick leave scheme and was in the course of implementing changes endorsed by the Labour Court.

It said that since the scheme was introduced in March 2014, the rate of sick leave across the public service had fallen by 0.3 per cent to 4 per cent.

At the same time, the number of days lost to sick leave per full-time equivalent employee had fallen by 0.7 days to 8.8 days.

It said the total cost of sick leave across the public service for 2017 was estimated at €341.5 million, representing a cumulative saving of €167 million.