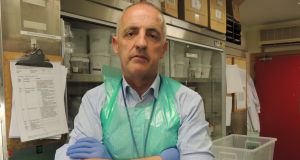 Prof Rob Landers said he had been campaigning for a new facility for 15 years ‘and suddenly, after a huge negative pressure from the media today, the HSE announces it’s going to start in six months’. time’ Photograph: Eoghan Dalton

One of the consultant pathologists who wrote a damning letter to the Health Service Executive informing them of serious concerns at University Hospital Waterford’s (UHW) mortuary has said he feels “cynical” about reports that construction of a new building will begin later this year.

Minister for Health Simon Harris said on Wednesday plans for the new mortuary were at an “advanced stage” and it was expected the request for tender “will be issued shortly”.

It came after The Irish Times and the Waterford News and Star published details of the letter from four consultant pathologists at the hospital.

The consultants reported to the South-South West Hospital Group that dead bodies had been left lying on trolleys at UHW, leaking bodily fluids on to corridors and making closed-coffin funerals unavoidable in some cases.

They said the mortuary lacked sufficient refrigeration and the situation was so serious that some bodies decomposed, causing “almost unspeakable” distress to families.

A statement from the Department of Health said funding for a mortuary building would be a “matter of priority”.

However, Prof Rob Landers, one of the four consultants, said: “I’m cynical about that. I’ve been campaigning on this one looking for a new facility for 15 years and suddenly, after a huge negative pressure from the media today, the HSE announces it’s going to start in six months’ time.”

Undertakers in the southeast said they had been aware of problems in the mortuary unit, which serves much of the region.

“The conditions the staff work in there are unreal,” said Donnacha Doyle, a funeral director in south Kilkenny on the outskirts of Waterford city. “It’s an awful place to bring a family. I gave up bringing them there, it was so bad.”

A spokeswoman for Mr Harris said the Government had “no reason” to believe the issues in UHW were replicated at other hospitals.

“Minister Harris has made contact with the management of University Hospital Waterford, who have assured him that they are to undertake interim measures while awaiting the replacement mortuary building,” she said.

“The Minister also received confirmation from the HSE that plans for the new mortuary are at an advanced stage and it is expected the request for tender will be issued shortly with the expectation that construction will commence before the end of this year.

“The Minister has made it clear to the HSE that this project needs to be progressed as a matter of priority and funding will be provided.” The new mortuary is expected to take 20 months to complete and will cost an estimated €5 million.

“The mortuary at UHW was deemed unfit for purpose in 2004, and a brief for a new mortuary was completed in 2006. Despite being given the green light in 2013, the project has not been progressed any further,” she said.

Sinn Féin’s David Cullinane said the letter “outlines deep concern about the poor and antiquated state of mortuary and postmortem services at UHW”. John Halligan, the local TD and Independent Alliance Minister of State who has campaigned on issues surrounding UHW, could not be reached for comment.