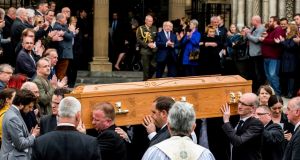 Members of the NUJ provide a guard of honour as the remains of murdered journalist Lyra McKee leaves St Anne’s Cathedral in Belfast after her funeral. Photograph: Liam McBurney/PA Wire

The critical moment at the funeral of Lyra McKee was when her friend, Fr Martin Magill, commended political leaders such as Arlene Foster and Mary Lou McDonald for “standing together” on Good Friday in the Creggan in Derry where the young journalist was gunned down by the New IRA the previous night.

With great potency, Fr Magill then asked at the ecumenical funeral service in St Anne’s Church of Ireland Cathedral, “why in God’s name does it take the death of a 29-year-old woman with her whole life in front of her to get us to this point?”

Fr Magill got as far as “whole life in front of her” when the thronged cathedral and the people in Writers’ Square outside erupted into spontaneous applause, the people inside then rising to their feet to continue the ovation. Ms Foster and Ms McDonald sitting beside each other were a little slow to stand but they did, their unsettled demeanours recording a public cry for political action.

The DUP and Sinn Féin leaders after hearing Fr Magill’s appeal for movement said on Wednesday evening they too wanted to restore the powersharing administration at Stormont. But equally they appeared to be holding to fixed, opposing positions.

Ms Foster repeated her proposal to bring back Stormont while holding a “parallel” talks process to resolve outstanding differences. Ms McDonald said the British and Irish governments “should now meet with urgency through the British Irish Intergovernmental Conference, to provide solutions to the outstanding rights issues, which are at the heart of sustainable powersharing”.

While the initial response from Ms Foster and Ms McDonald appeared rather lukewarm, the priest’s powerful words and the equally strong response of the mourners indicated a public demand and yearning for political compromise.

“I dare to hope,” said Fr Magill, “that Lyra’s murder on Holy Thursday night can be the doorway to a new beginning. I detect a deep desire for this.”

Fr Magill also had a message for the New IRA, quoting a friend of Ms McKee to say the people had “had enough” of them. To her killers, he said, “I encourage you to reflect on Lyra McKee, journalist and writer, as a powerful example of ‘the pen is mightier than the sword.’ I plead with you to take the road of non-violence to achieve your political ends.”

He told of how she sent him a tweet of a picture of herself dressed in a nun’s veil, a glass of cider beside her, with an accompanying caption, “Got roped into performing as part of a Sister Act tribute act for Foyle Hospice. Hey @MartinJMagill, you need any help with Mass tomorrow?”

There were many more such stories from Fr Magill and from Ms McKee’s sister Nichola and from her friend, Stephen Lusty.

The latter said she was a woman who could be “fearless and naive in equal measure” and also funny in asking random questions of him, such as which was closer, Londonderry or Derry, and why do Protestants eat more vegetables than Catholics?”

While the service was dotted with such moments of laughter, ultimately the sense of the day was one of futility and the terrible loss of a young talented life. Mr Lusty told mourners that Ms McKee had intended to propose next month to her partner, Sara Canning.