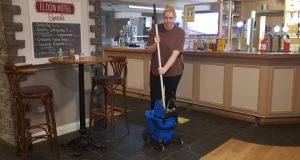 Louise O’Donovan: ‘As [the water] was coming down the street people ran upstairs and grabbed duvets off beds to throw them down to stop it.’ Photograph: Barry Roche.

“We’ve been here since the 1930s, when my grandfather opened a garage here, and this is the first time it ever flooded,” said Maeve McCarthy as she explained the damage Storm Ellen caused to her family’s premises in Skibbereen, Co Cork.

Ms McCarthy and May Pyburn, her colleague at Charles McCarthy Auctioneers on Bridge Street, said flood waters gushed from a blocked culvert and started to flow down Bridge Street from around 9pm. The water quickly started to rise over the doorstep and flooded the building to a depth of several inches.

“We came in about half ten and we had several inches of water, but the local community were brilliant,” Ms McCarthy said. “People just came down and started brushing the water out, so we managed to get the place clear quickly enough. There was this great community response and people were fantastic.”

Louise O’Donovan, who across the street runs the Eldon Hotel with her parents, Michael and Eileen, had a similar story of the flood bringing out the best in people.

She said a number of locals took off their shoes and socks and waded in to help them try to clear the flood waters.

“The water was up to the window sills, so I suppose we had over 2ft of water,” Ms O’Donovan said.

“It came in the front door first. As it was coming down the street people ran upstairs and grabbed duvets off beds to throw them down to stop it, but it was too strong and it came down the lane and in the side too.”

She said her father and members of the local fire service managed to open a storm drain on the pavement outside and, only for this, the 19-bedroom hotel would have been even more badly damaged.

“The staff began cleaning the kitchen straight away and the guests helped out too, as did the neighbours. It doesn’t look too bad now because we were able to get the water out relatively quickly, but we don’t know how much damage has been done to the electrics and everything else.”

Taoiseach Micheál Martin visited Bridge Street on Thursday and met the dozen or so homeowners and business people affected by the flooding. He was shown the source of the problem - a culvert that became blocked with debris on the Cuttings, a nearby road, and caused the water to flow down the town.

“What’s frustrating,” Mr Martin said, “is that a lot of work has been done here on the OPW Flood Relief Scheme, 19 lots out of 20, but this piece came late in the day and wasn’t done. So people are annoyed, but we’ve been in touch with both Cork County Council and the OPW to make sure this work gets done.”

Fianna Fáil Cork South-West TD Christopher O’Sullivan said it was frustrating that the €37million relief scheme had failed to protect the town.

“This shouldn’t be happening in Skibbereen . . . the entire town should be dry even in this intense rainfall.”

However, Ezra MacManamon of the OPW rejected Mr O’Sullivan’s suggestion that the relief scheme had failed to do its job, which he said was to protect Skibbereen from flooding linked to the Ilen River, its major tributaries and tidal flooding.

“The flood relief scheme did its job on Wednesday night, but very late on in the construction of the scheme we became aware of this very minor local water course in the Cuttings when it flooded some 16 properties on the Main Street in 2016, it just wasn’t on our radar until then,” he said.

He said Cork County Council had since worked on the issue and that it was “just unfortunate the work was not completed before yesterday”.

“There was a temporary screen over the inlet to the pipe and that got blocked or partially blocked and that’s what caused the flooding in Bridge Street.”