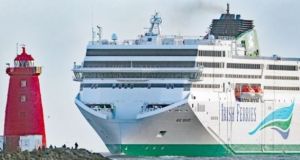 There is ‘a lot of smoke and mirrors’ around the decision by Irish Ferries to halt its service between Rosslare and France, an Independent councillor in Wexford has said. Photograph: PA Wire

There is “a lot of smoke and mirrors” around the decision by Irish Ferries to halt its service between Rosslare and France, an Independent councillor in Wexford has said.

Cllr Ger Carthy says that the decision is “ill advised” and he asked where was the market research to back up the company’s claim that customers would prefer to sail from Dublin Port.

He told RTÉ’s Morning Ireland that bookings from Rosslare were full. He also rejected the suggestion that the higher rates being charged by Rosslare Europort in comparison to Dublin Port had been a factor in the decision.

“The rates were not mentioned in any of the press releases. I don’t believe that’s the case,” said Mr Carthy.

In mid-December Irish Ferries announced it was “unlikely” to continue to operate a service between Rosslare and France in 2019.

A company statement said: “We continue to keep this situation under review. Our new WB Yeats ship will operate from Dublin to Cherbourg.”

Rosslare-France does not feature on the company’s 2019 schedule, which does list the Cherbourg route, along with its UK services Dublin to Holyhead and Rosslare to Pembroke.

Wexford County Council will meet on Wednesday to discuss the decision by Irish Ferries to withdraw the service to France.

“This is a damning indictment of the management of Rosslare port,” added Mr Carthy.

He said that three years ago when he was mayor of Wexford he met with the managing director of Irish Ferries, who told him that Rosslare Europort’s fees were high in comparison with Dublin Port.

“This needs to be looked at in the context that people do exist outside the Red Cow roundabout,” said the councillor.

Mr Carthy said the opening of a new motorway in Wexford in the middle of 2019 will shorten the journey from Dublin to Wexford by 20 minutes.

Public anger in Wexford is palpable, he said. “People are very annoyed with Irish Ferries. The people of Rosslare and Wexford have been very loyal to Irish Ferries,” he said.

He said Irish Rail should have invested more in the port over the years. Plans for a €15million investment for the port are going to be difficult to implement he said, especially as €1.2million of annual revenue (fees from Irish Ferries) “are sailing out into the sunset.”