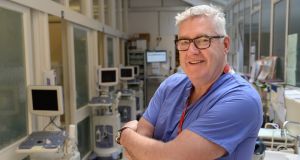 Prof Shane Higgins’s period as master master of the NMH is expected to see it move from its current location at Holles Street to the campus of St Vincent’s University Hospital at Elm Park. Photograph: Dara Mac Dónaill

Prof Shane Higgins has been inaugurated as the new master of the National Maternity Hospital (NMH). He takes over from Dr Rhona Mahony, whose seven-year term ended this week.

Prof Higgins’s period as master is expected to see the NMH move from its current location at Holles Street in Dublin city centre to the campus of St Vincent’s University Hospital at Elm Park.

Speaking following his inauguration, Prof Higgins said he was deeply honoured to take up the post. “This is an extraordinary national institution with an international reputation for excellence and I look forward to working with the staff to bring it through what may be the greatest period of change in its 124-year history,” he said.

A consultant obstetrician and gynaecologist, Prof Higgins was elected last May by the governors of the hospital following a selection process which considered a field of experienced Irish and international obstetricians.

He is a specialist in maternal-foetal medicine and has a broad range of clinical and management experience in Ireland, Scotland and Australia.

For the past five years he has been the clinical lead for the NMH’s move to the St Vincent’s campus.

The inauguration ceremony at Holles Street began with an act of celebration which included representatives of religious and secular communities.

In accordance with tradition, Prof Higgins then knocked on the closed door of the hospital entrance on Mount Street and was admitted to begin his term.

“In the meantime we must remain focused on providing the highest level of care to our patients within the current hospital buildings and meet the challenges associated with that head on. The staff of the National Maternity Hospital are an outstanding group of professionals and I look forward to working with them over the next number of years and realising the goal of moving to a state of the art facility.”

The deputy chairman of the board of the NMH, Nicholas Kearns, said the inauguration of the new master marked the start of a critical period in the hospital’s history.

“Prof Higgins has both the challenge and the privilege of leading us through the move to the excellent new hospital which is to be built at Elm Park. On behalf of the board, I wish him well,” he said.

“I also want to pay tribute to the leadership shown over the past seven years by Dr Rhona Mahony which has brought us to the point where the long hoped-for new hospital is to become a reality.”