Number of potentially fatal cases of pneumonia in children has plummeted 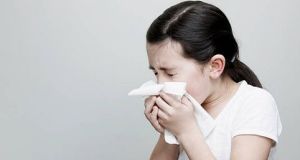 The number of cases of the disease among young children has fallen from 46 in 2008 to just one in 2016. Photograph: Getty Images

The number of potentially fatal cases of pneumonia in young children has plummeted over the past decade since a vaccine was introduced, a new report shows.

The incidence of invasive pneumococcal diseases in under-5s has been falling since 2008, when a vaccine protecting against the seven most lethal strains was introduced.

In 2010 a new vaccine extending protection to 13 strains was introduced, and since then the incidence of diseases caused by the additional six strains has fallen by 80 per cent among the same age group, the HSE report shows.

Last year there were 415 confirmed cases of pneumococcal diseases and 42 deaths, the report by the HSE’s Health Protection Surveillance Centre says.

The vast majority of cases were among older patients aged 75 years and up, but the report says there has been a significant indirect impact on the incidence of the disease among this group from the introduction of the two vaccines.

Pneumococcal infection is a leading cause of death worldwide, with mortality highest in those who develop sepsis or meningitis. Pneumococcal meningitis fatality rates of 11 to 16 per cent were reported in Ireland between 2008 and 2016.