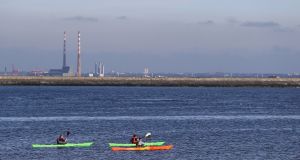 Temperatures on Friday will be a few degrees cooler than of late with highs of 12 to 16 degrees. Photograph: Brian Lawless/PA Wire

Met Éireann has issued a status yellow wind warning for Galway and Mayo on Thursday and Friday with gusts of up to 110km/h expected.

After several balmy summer days, it said a more unsettled spell of weather lies ahead.

The forecaster warned of south to southeast winds, veering southwesterly, which will reach mean speeds of 45-65km/h with gusts of 85-110km/h, mainly in coastal areas and on exposed hills and mountains. The warning is in place until 6pm on Friday.

There is also a status yellow warning in place for wind in Co Donegal on Friday. Met Éireann said there would be southerly winds veering southwesterly which will reach mean speeds of 45-65km/h with gusts of 85 to 110km/h, especially in coastal areas and on exposed hills and mountains.

Thursday is due to start with wet and windy weather, with sunshine and blustery showers following. While it is due to be relatively mild, outbreaks of rain will spread northeastwards across the country on Thursday evening.

Temperatures on Friday will be a few degrees cooler than of late with highs of 12 to 16 degrees and further showers, Met Éireann added.

Saturday and Sunday will see a mixture of sunshine and showers.

Separately, a small craft warning has been issued with southerly winds expected to occasionally reach force six on Wednesday evening on coasts from Loop Head to Rossan Point to Fair Head.